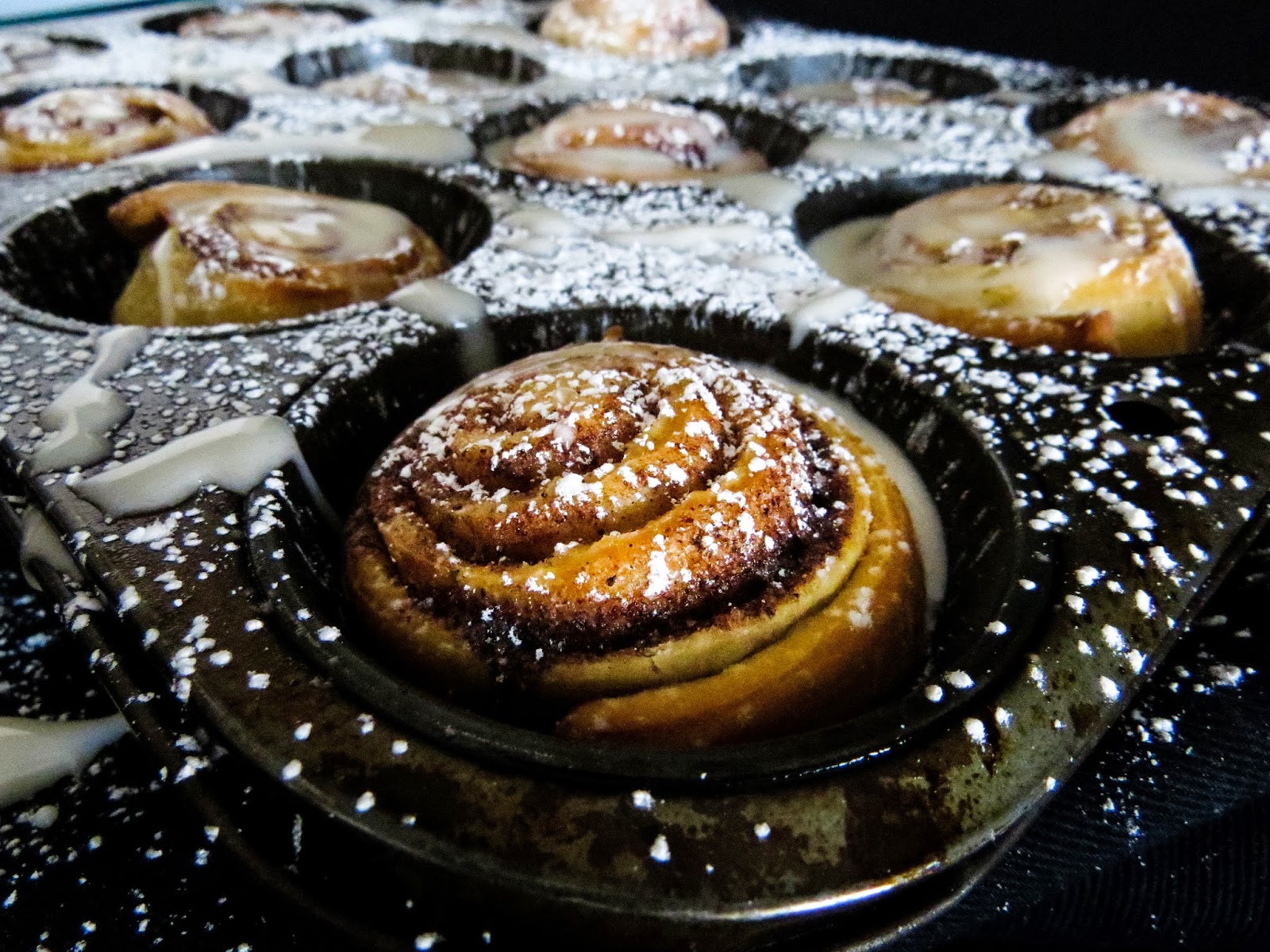 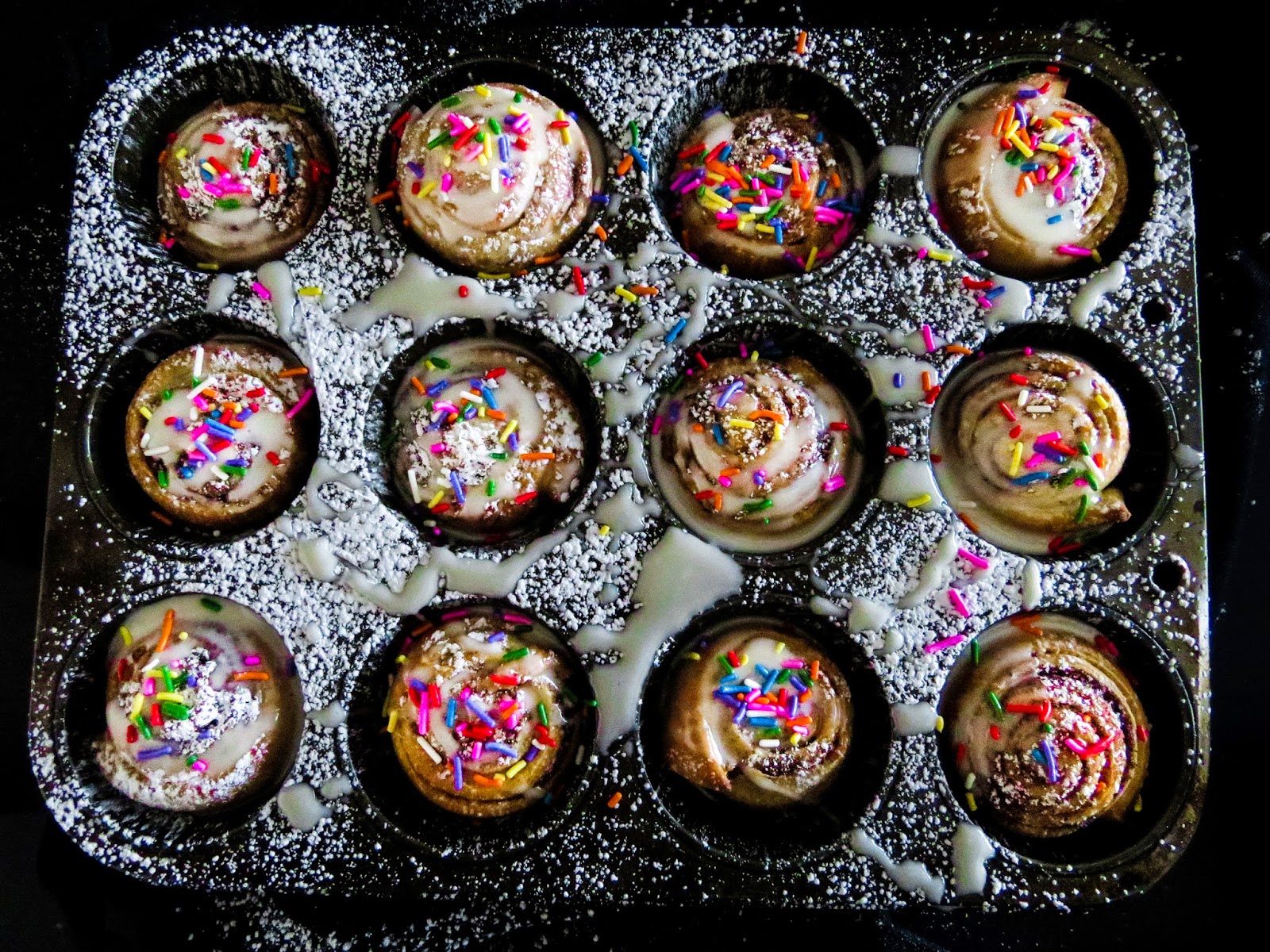 Last Tuesday was Marti Gras, which has nothing to do with this post. Side note: I didn’t know it was called “Fat Tuesday”. Why is that? Who comes up with these names? The world is strange. What I am really getting at is that everyone likes a good party (good over-generalized statement, Nate. Love it!). Parties are fantastic ways to get out into the world, meet new people, connect with friends, and just be all around a social member of society. This sounds great in movies and on Twitter, but for anyone who has been to a party of any degree before, knows how anxiety infested they are. Wear the wrong socks, make an inappropriate joke, or bring a vegetable tray (never be that person for the sake of humanity) and you will be instantly annihilated by judgmental stares and passive-aggressive tweets from the other party guests. This is why I choose to stay home and find solace with the Internet, where is never any judgment. 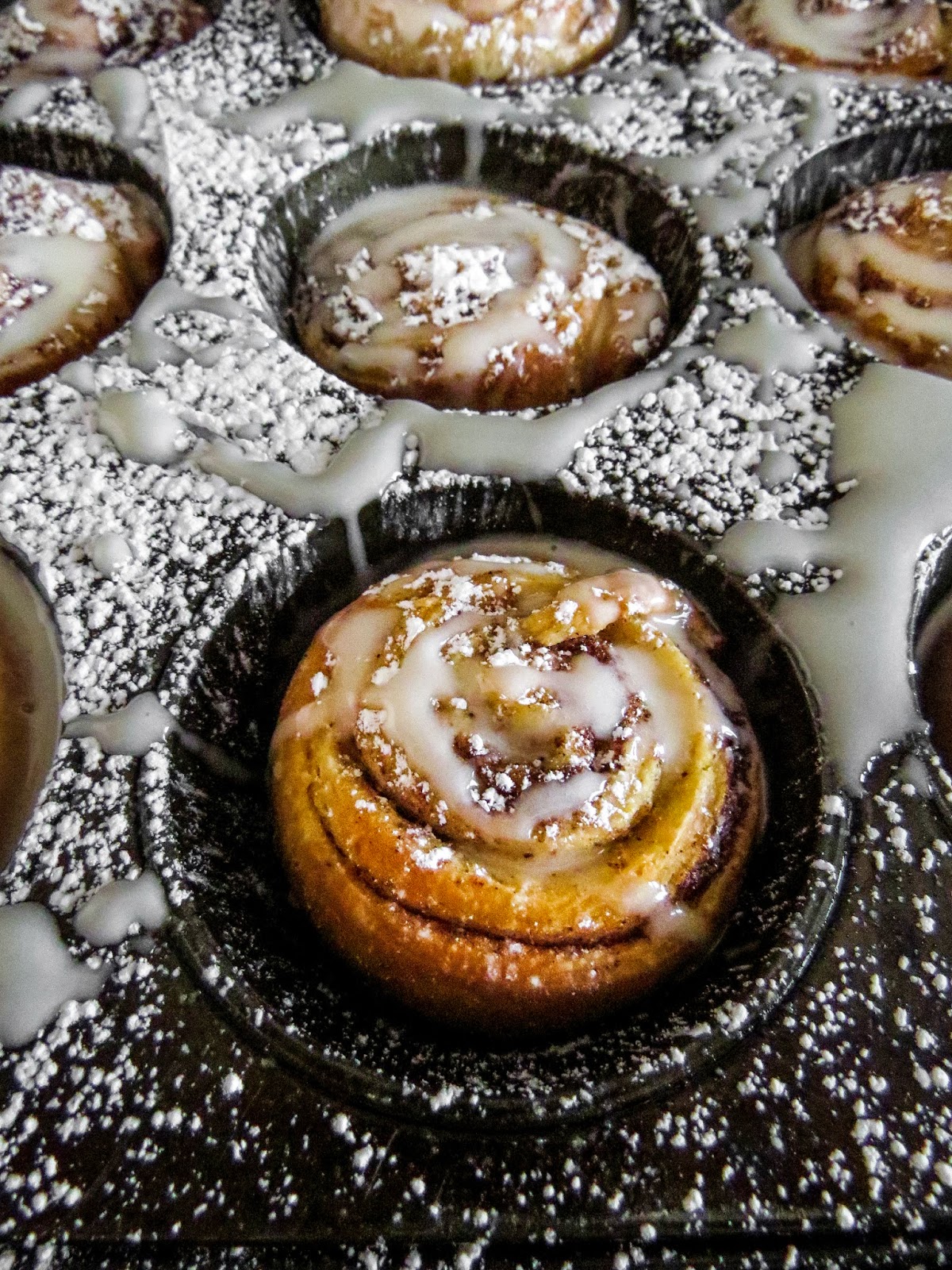 All kidding and self-deprecation aside, I really enjoy a good party with friends and/or family. As I get older, and more experienced with cooking/baking, I find myself, as I’m going to a party, feeling obligated to make something for the occasion. Even if the host says “Don’t worry about food, just bring yourself and a positive, party attitude”, what I hear is, “I demand food and I demand it now.” Inevitably, my subconscious bullies me into making guilt-tripped baked goods. 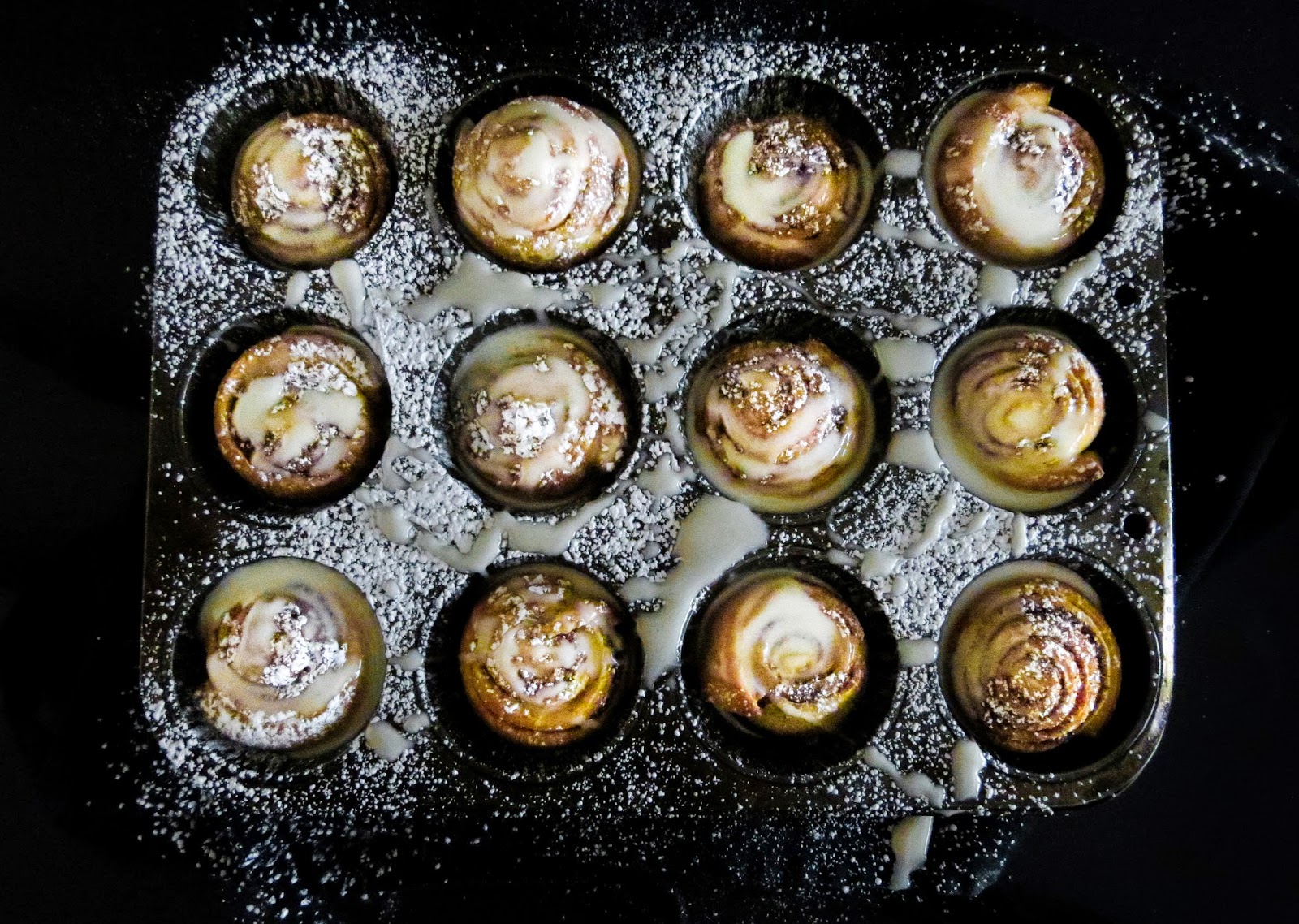 My twin brother, Jon, and I were invited to a birthday party this past weekend. Unfortunately, I wasn’t going to be able to make the party due to work commitments, but I knew I had to send something fun, creative, delicious, and something that everyone would enjoy. My answer: bite-sized cinnamon rolls with multi-colored sprinkles (keeping to the birthday theme). Nothing says party like baked goods. My other option was banana bread, but I didn’t want to be the short guy and the loser who brought banana bread to a birthday party. 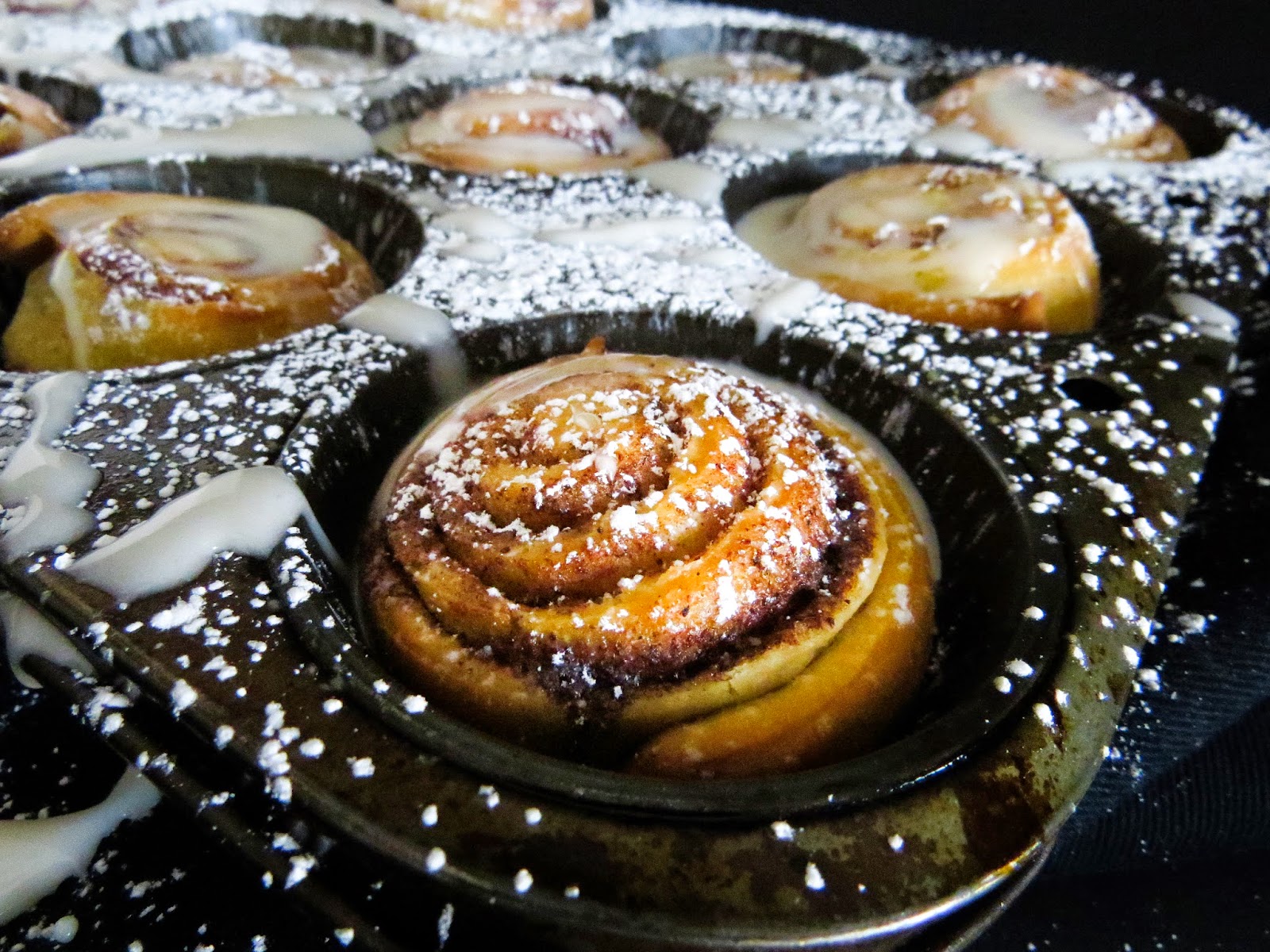 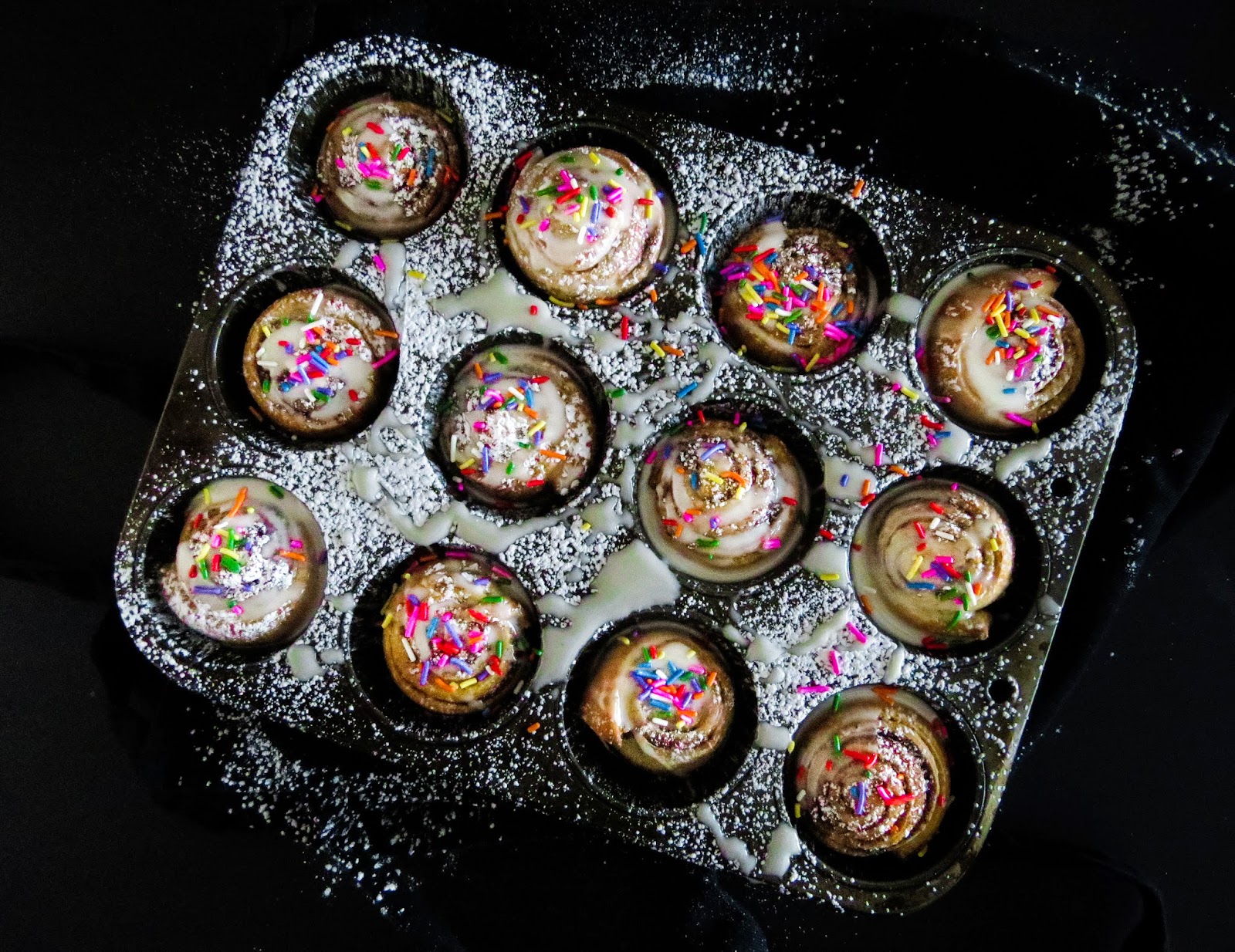 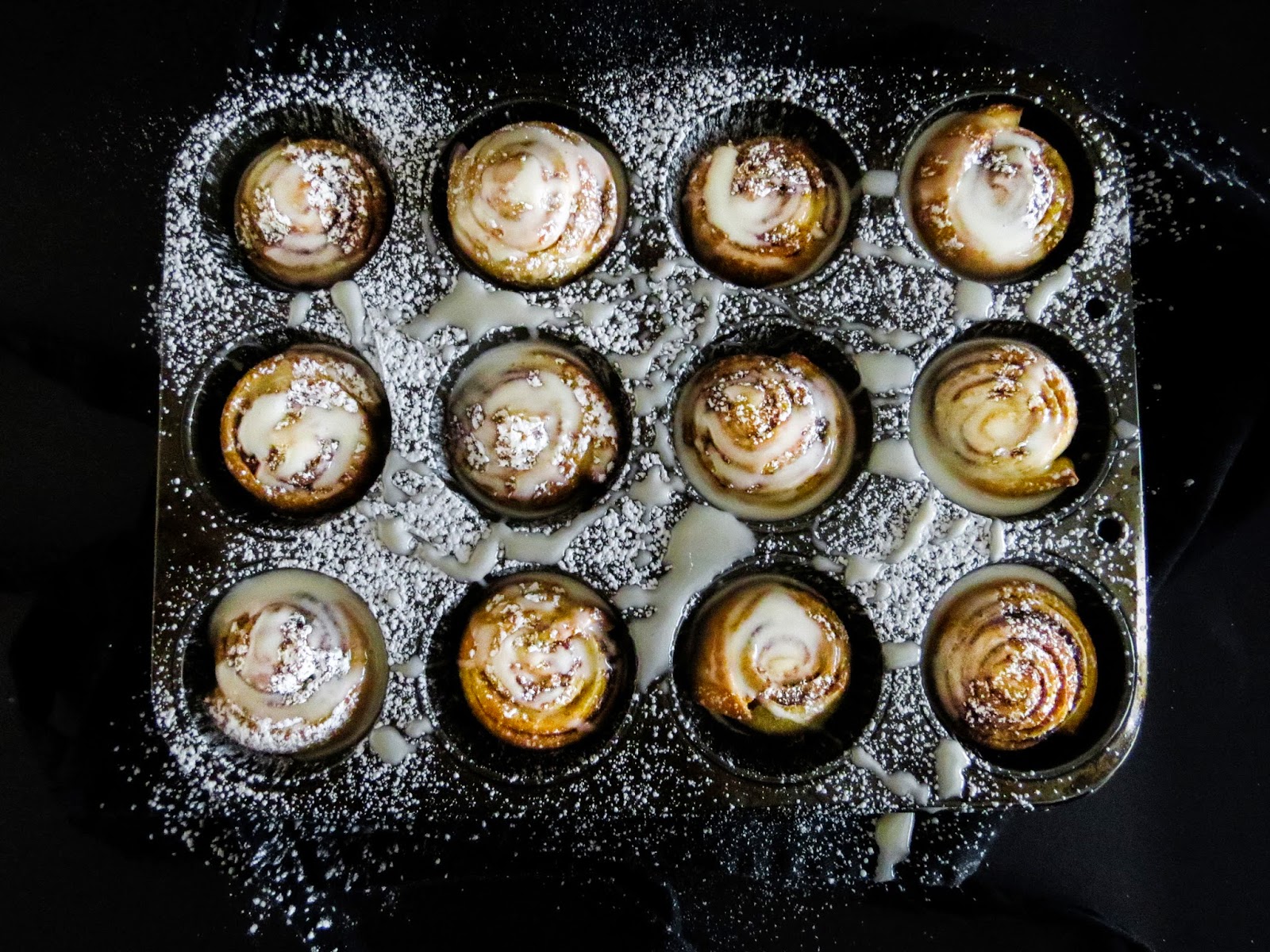 The cinnamon roll recipe I used is incredible. It comes from Momma Crawford who, after finding a recipe for it online, has made it for my family and me for years. These cinnamon rolls are buttery, soft, warm, and have that sugary-sweet aroma that everyone craves on a Saturday morning. I love the smell of fresh brewed coffee lingering in the air as mom pulls a tray of gooey cinnamon rolls out of the oven. The icing is laced ever so evenly over the tops, melting together beautifully with the rest of the roll. Perfection.

The maple-sugar icing drizzled on top literally, and figuratively, “wraps” the whole roll together. It’s soft, ambrosial, and warm with delight. Imagine the center of a gooey cinnamon roll, but the entire thing being that. This cinnamon roll is that fantasy. I know, your mind is blown. I usually make these rolls bigger (woah size queen), but since I was sending these with Jon (who I personally can’t trust around anything sweet because he’ll just devour it and leave it left for dead), I wanted to make these bite sized. Plus, nothing says party like multi-colored sprinkles (seriously, ask anyone.) On a snowy day or a Saturday morning, these cinnamon rolls are practically perfect in every way (okay, Mary Poppins). This recipe is inspired by the Food Network Kitchen.


Over low heat in a medium saucepan, heat your milk until it reads 100°F on a candy thermometer.  Remove from the heat and sprinkle in the yeast and sugar (it’s the yeast you could do). I know you will be tempted, but don’t stir this mixture. You want the yeast to be active and start tearing down the molecular components of the sugar molecules (learn that from biology last semester. Who would have thought I would be so knowledgeable?) Let it sit for about five minutes. After five minutes, whisk in your melted butter, egg yolks, vanilla and maple extract. 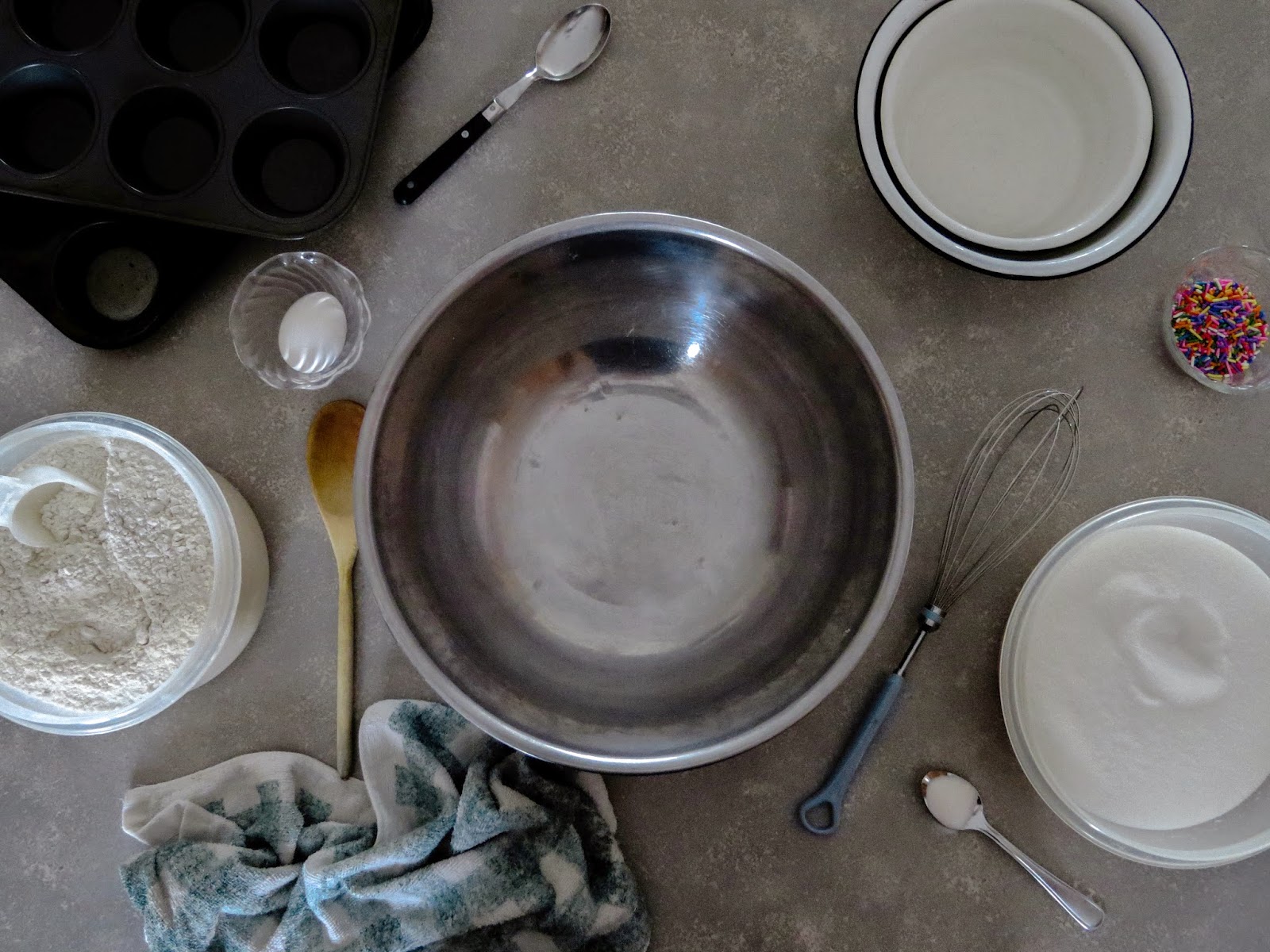 In a large bowl, take a fork and whisk together the flour, ¼ cup of sugar, the salt, and nutmeg. After all is well in the land of dry ingredients, make a well in the center of the mixture. Slowly pour in your yeast mixture into the well. Take a mixer and mix on low speed until the dough begins to become sticky and clingy (even after you file a restraining order). Transfer the dough to a flour worked surface (the driveway is probably not an ideal location) and knead the dough until it begins to form into a centric ball of dough, shaping as you go, about 5-8 minutes. 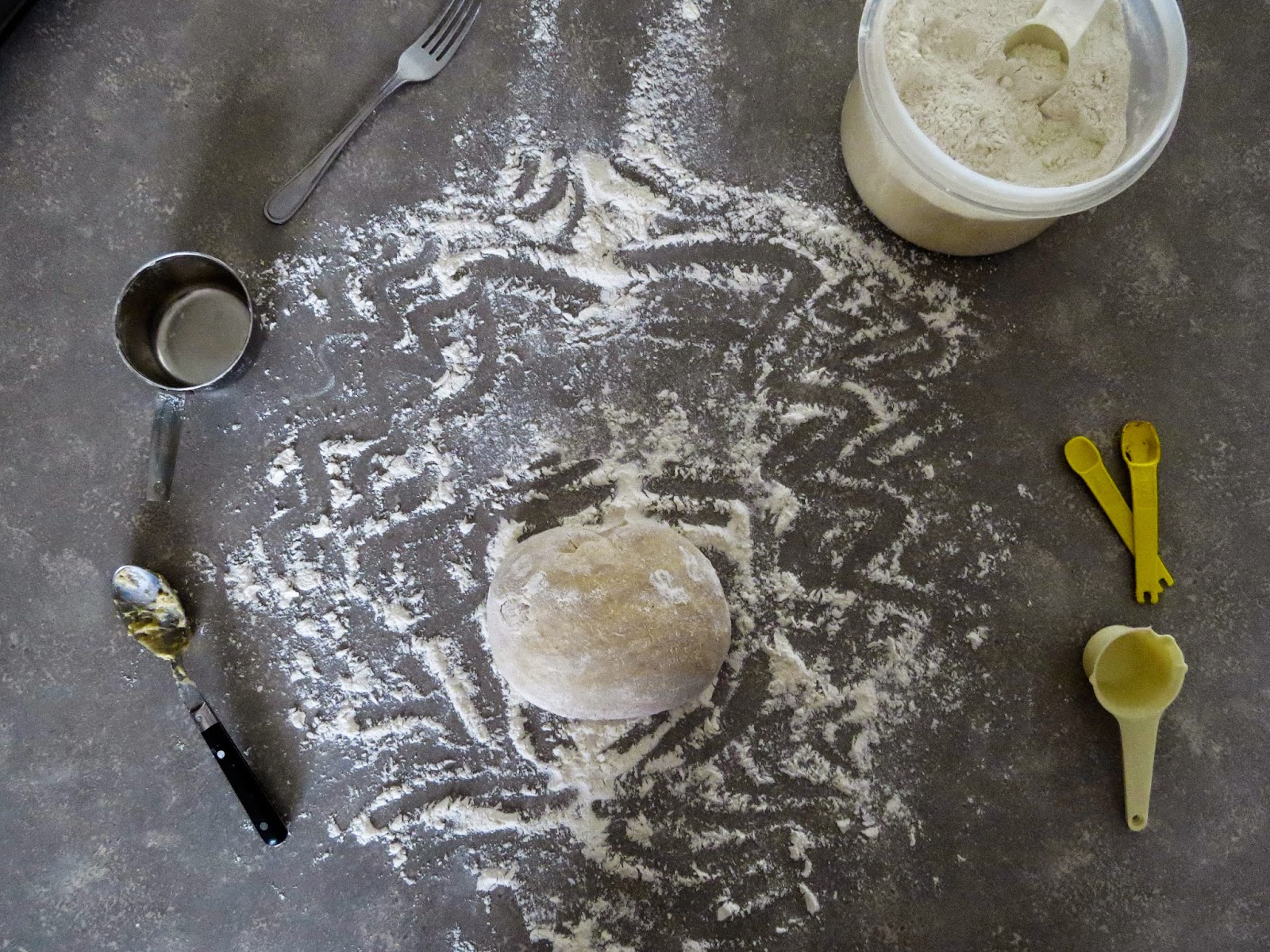 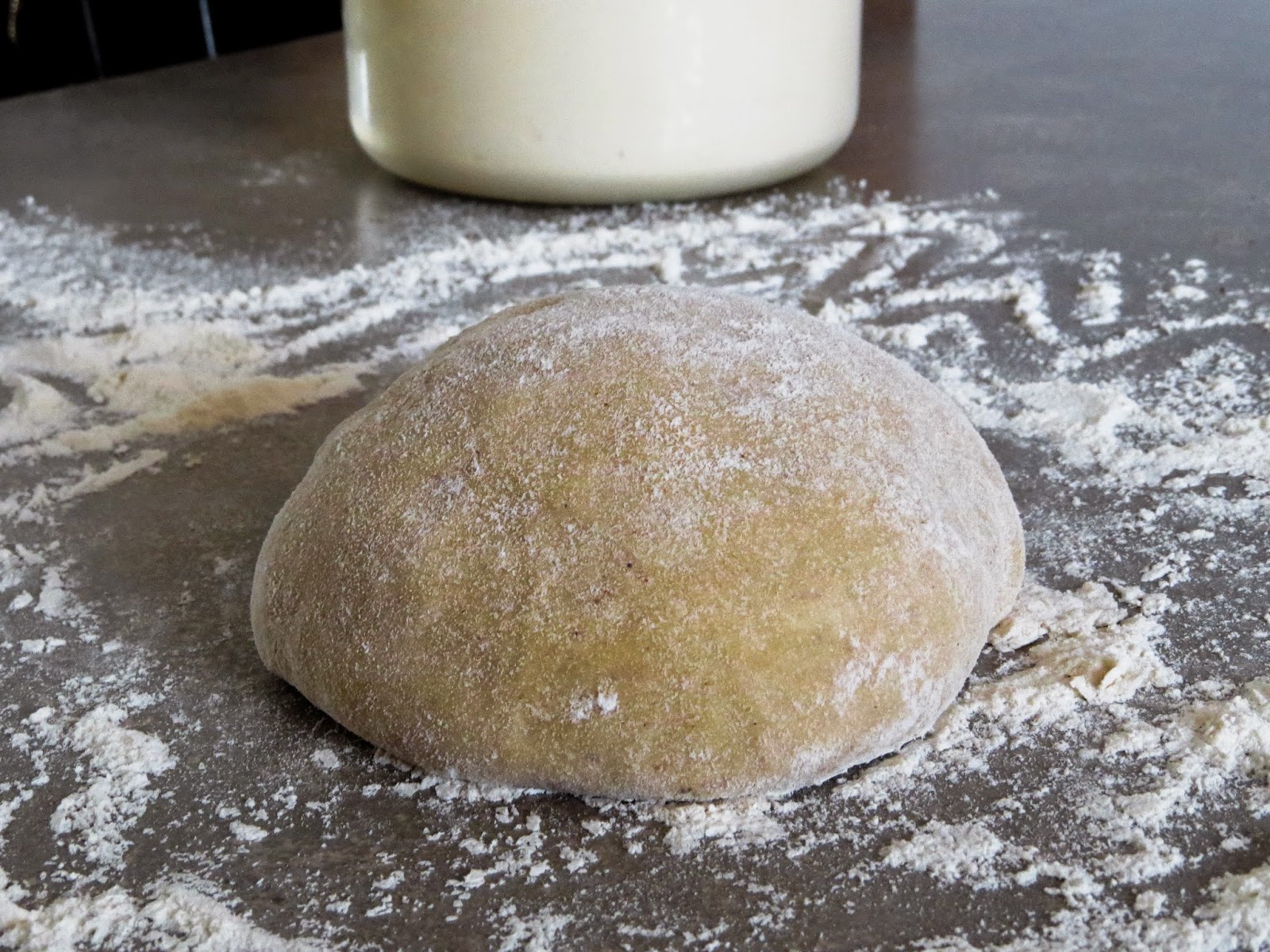 In a large bowl, spray the inside with cooking spray. Place your dough into the bowl. Cover with plastic wrap or a tea towel if you’re fancy. Place your bowl in a draft free place for 1 hour 15 minutes. I suggest putting your dough bowl in a turned off oven (or turnt up! Whatever your oven preferences may be). Tip from Momma Crawford: "Preheat your oven to 325°F and place your bowl on top of the oven, covered with a tea towel. As the heat rises, so will the dough." While the dough is rising, in a small bowl, stir together the sugar, cinnamon, cardamom, and ground cloves. 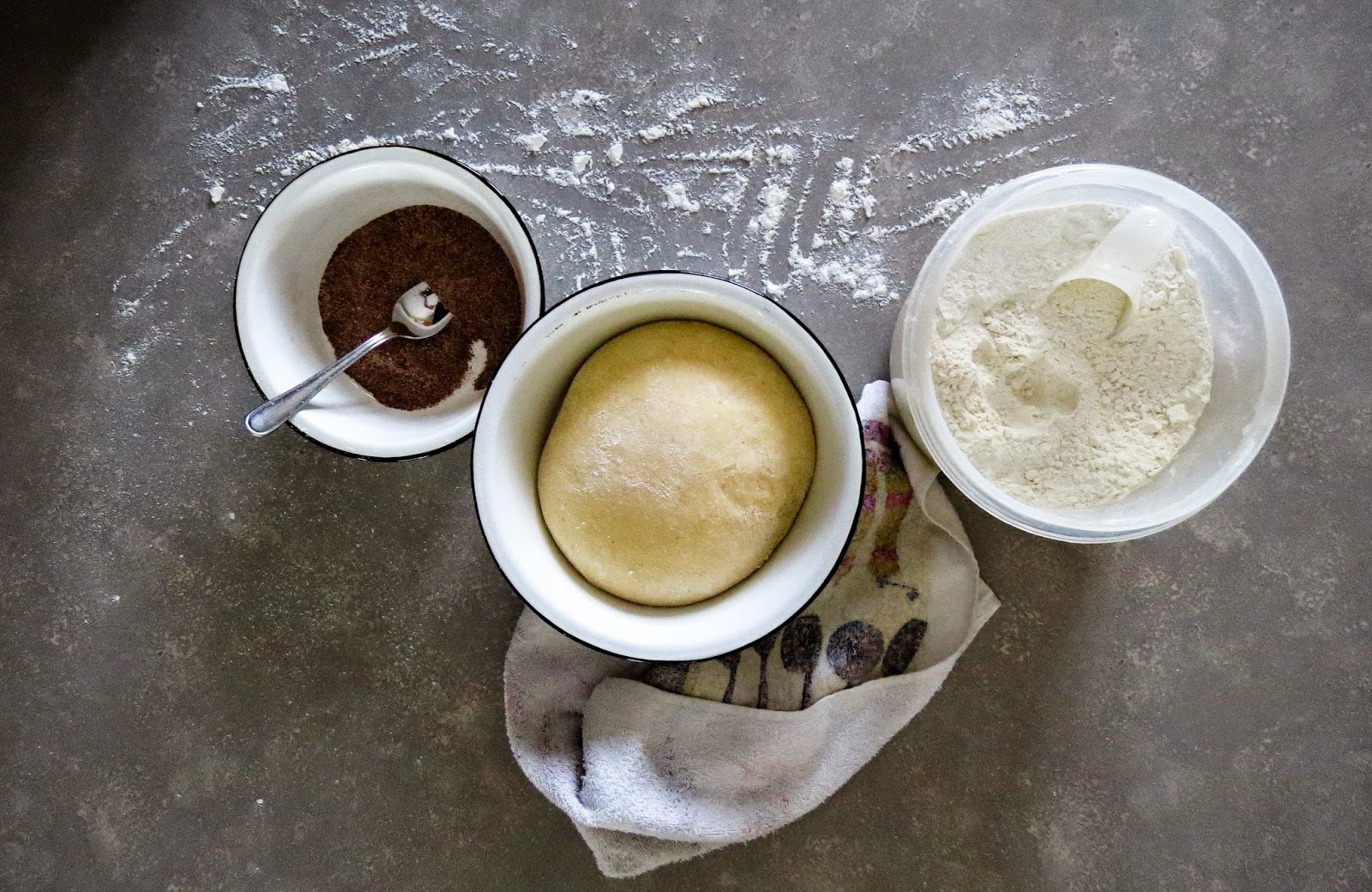 On a floured surface, roll your dough out using a floured rolling pin, about ¼ inches thick. The dough should look like an edible rectangle. With a butter knife and a delicate hand, spread the soften butter on the dough. Distribute the sugar mixture evenly over the dough. For smaller rolls, roll length wise. For larger rolls, roll width wise. Gently roll the dough into a cylinder. If you take it slow and believe in yourself, your cinnamon rolls will be rolled perfectly and look beautiful. 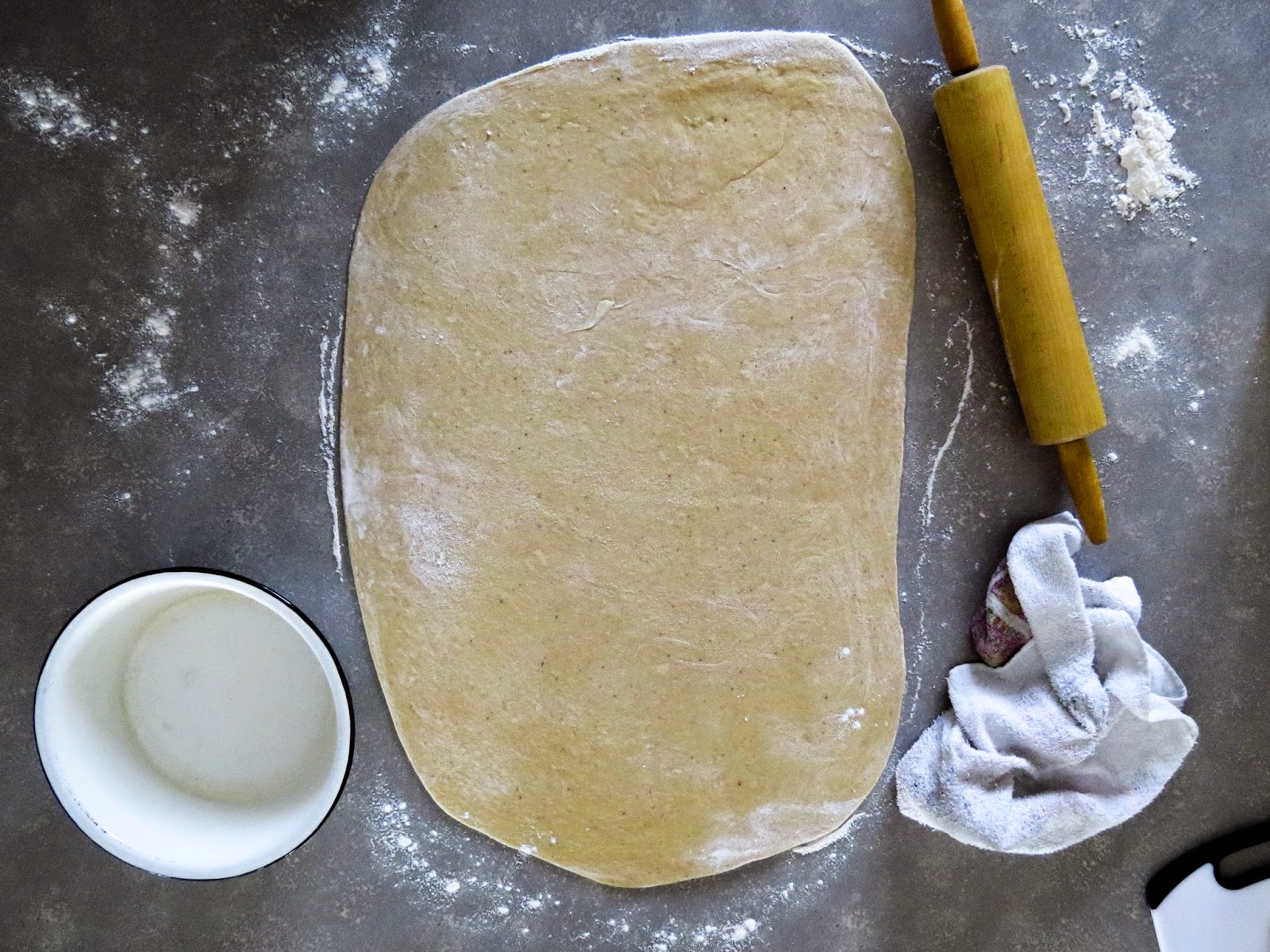 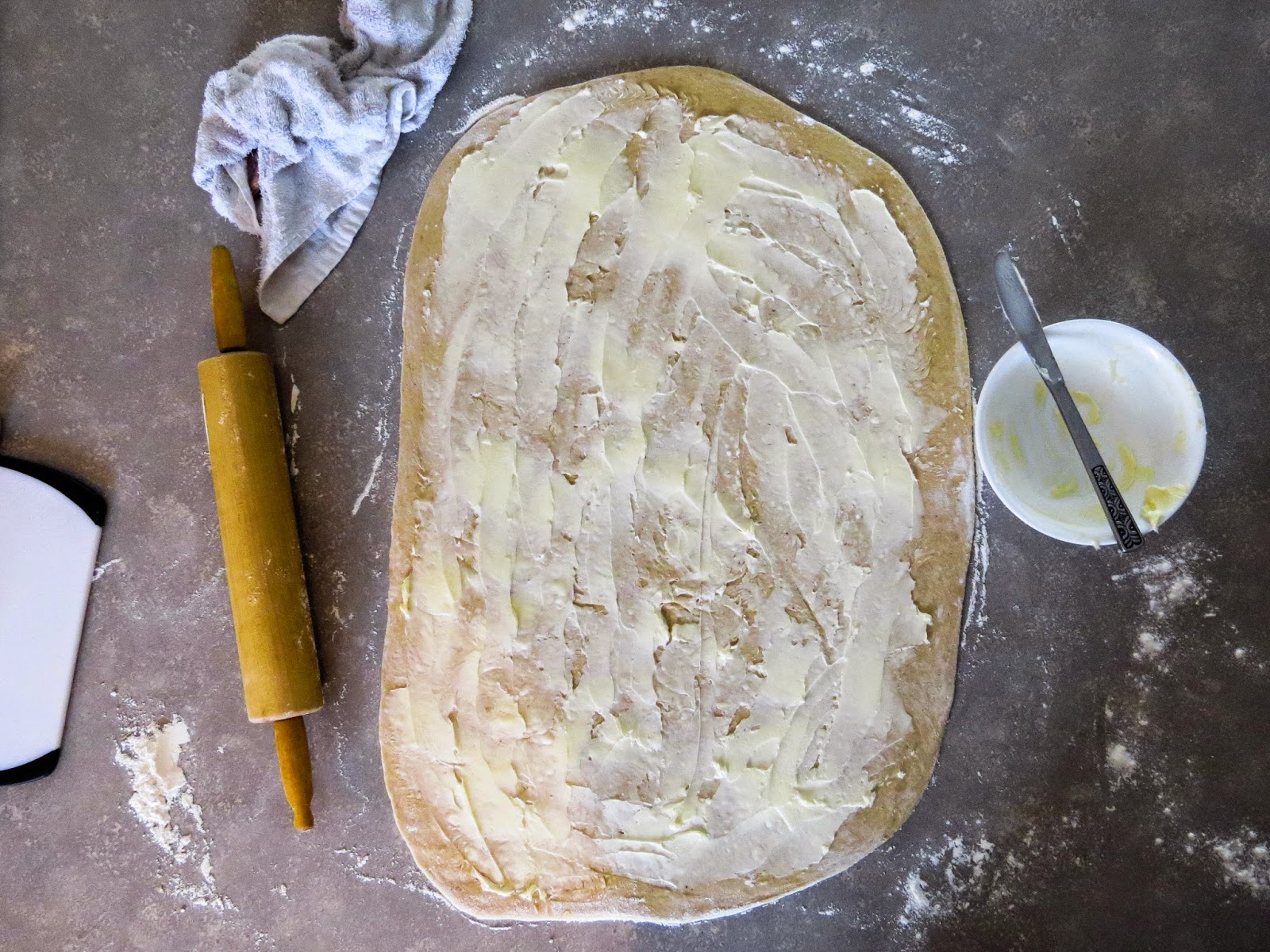 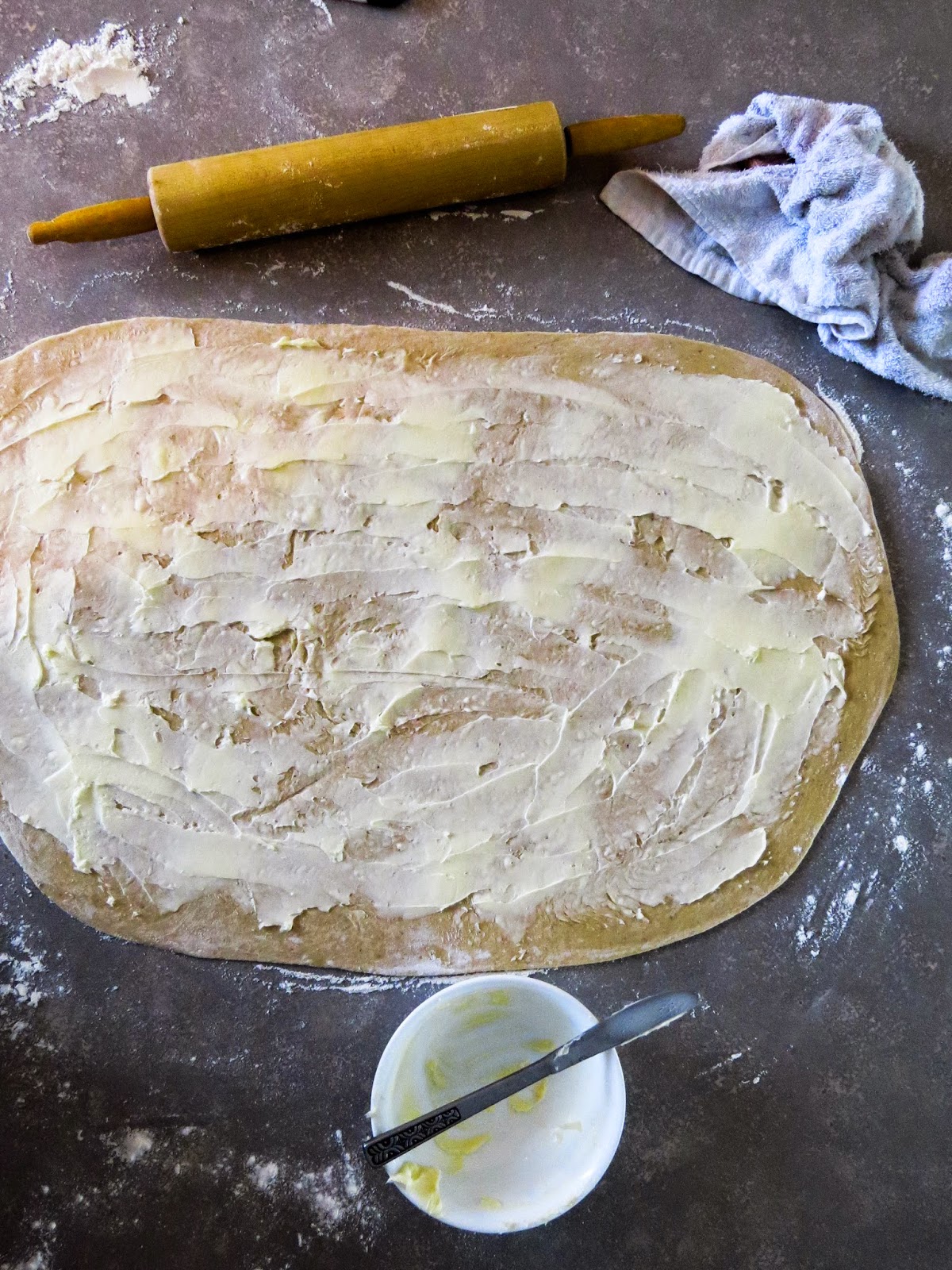 Thanks to my lovely hand model, Momma Crawford. She spent most of the morning, as I was making these cinnamon rolls, complaining that because I was using the natural light from the windows (I had the lights turned off) she had to cook bacon in the "dark". (A word from Momma herself: “And she sustained a burn because of it…just saying.  Yes, it was minor and it probably would have happened anyway considering the splattering nature of cooking bacon, but she of course, will never admit that and is totally blaming Nate!!”) 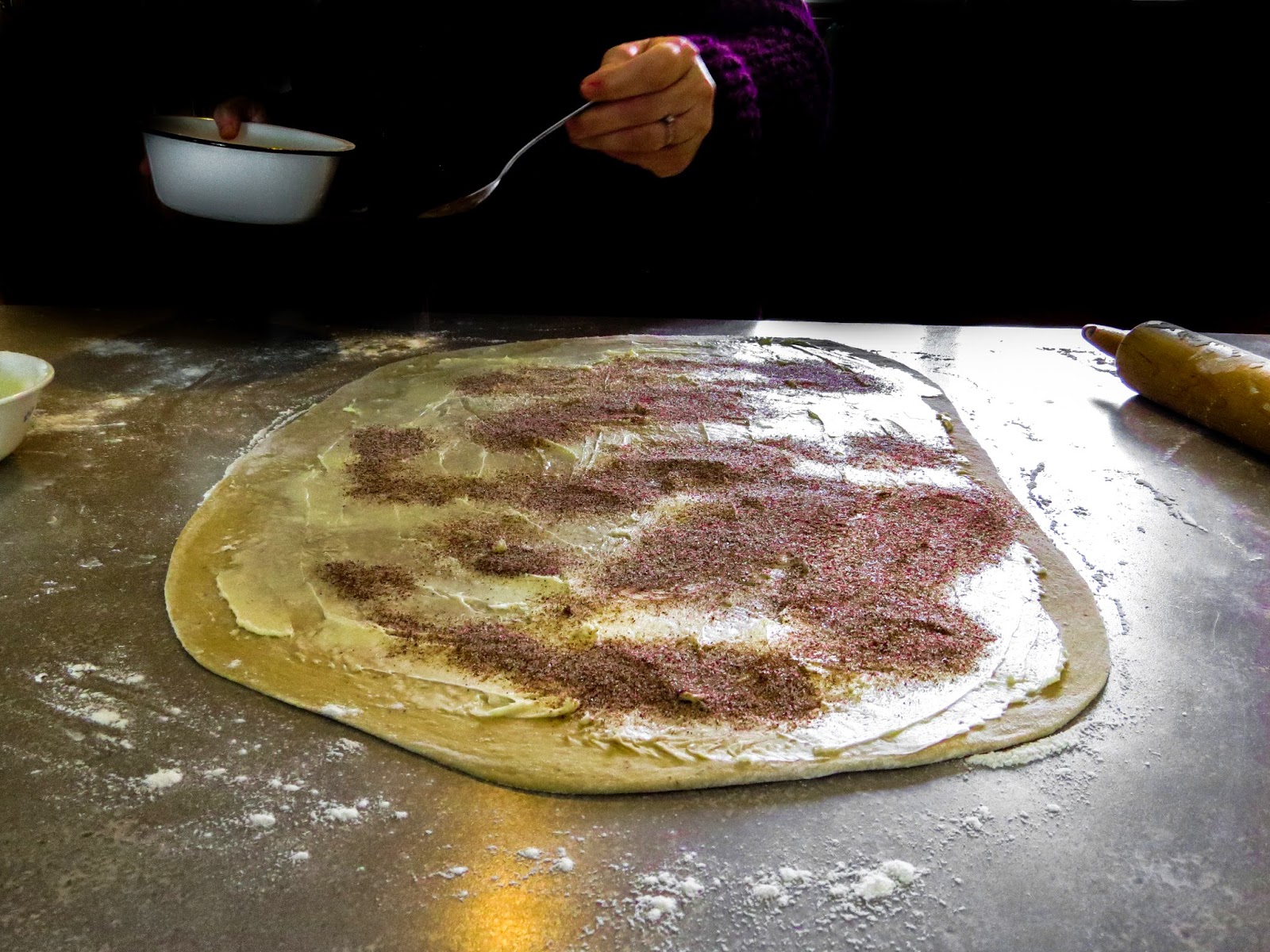 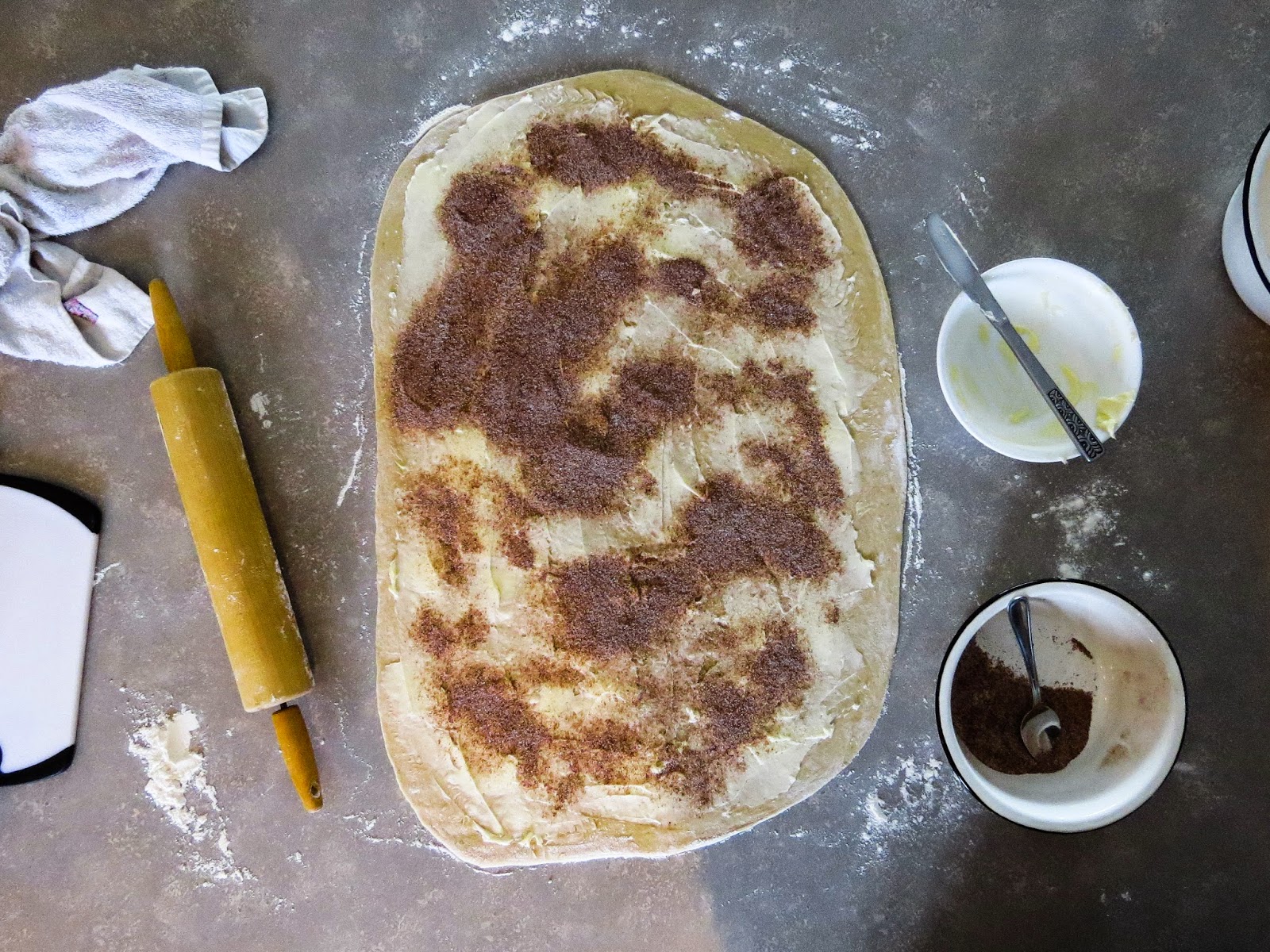 Cut your cinnamon rolls in any size you please! This is your chance to shine and do what makes you happy. I’m cutting mine a little smaller, about 1 inch thick, so I can fit them into a muffin tin to bake. What luck! That’s the next step. Take two buttered muffin tins and place the cinnamon rolls into the tins. You can put the rolls into a large 9x13 pan and bake as is or put them into muffin tins. I was going to party, so I wanted them to look as pretty as possible. Plus I had photos to take. I have made my choice. 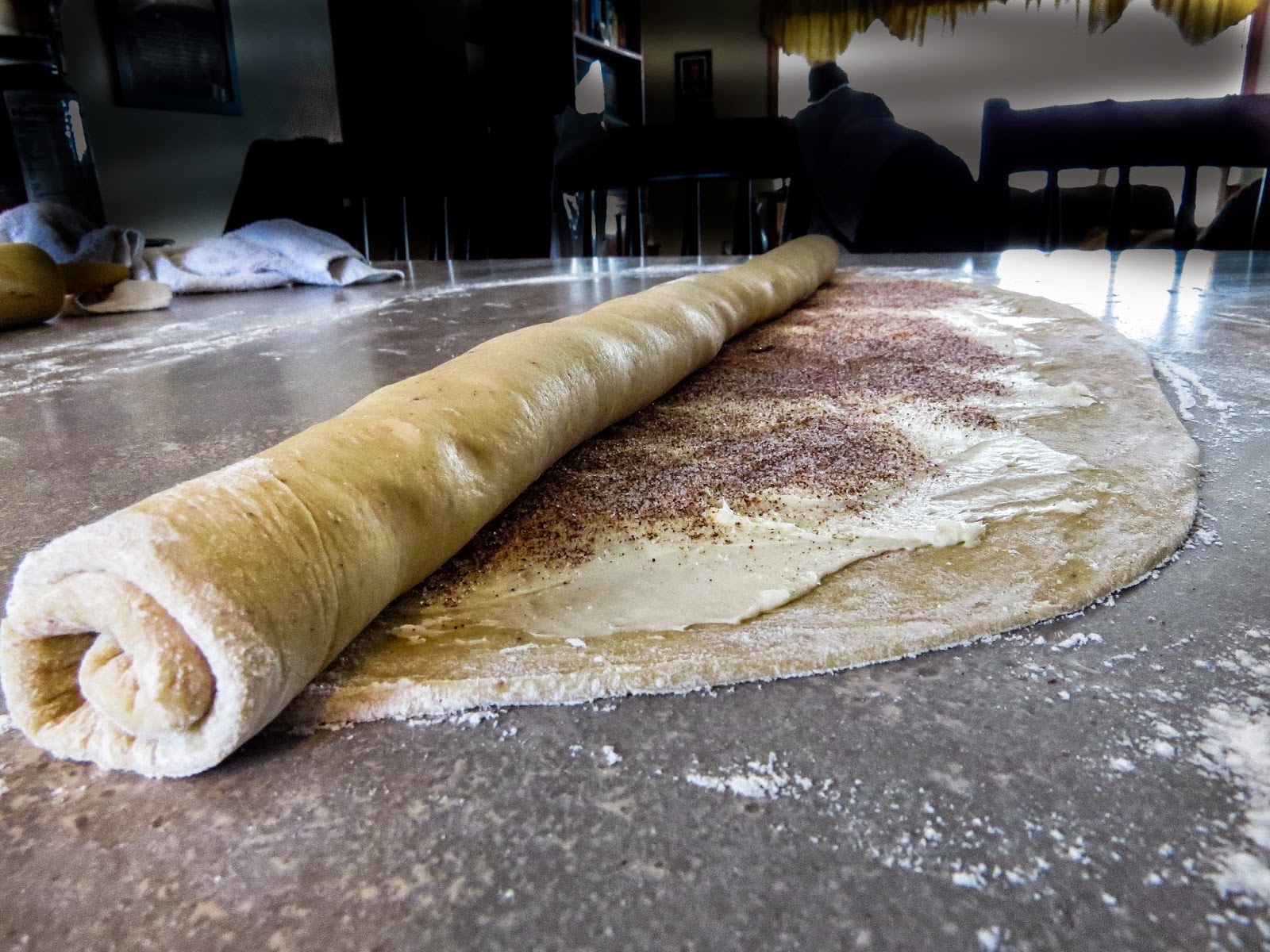 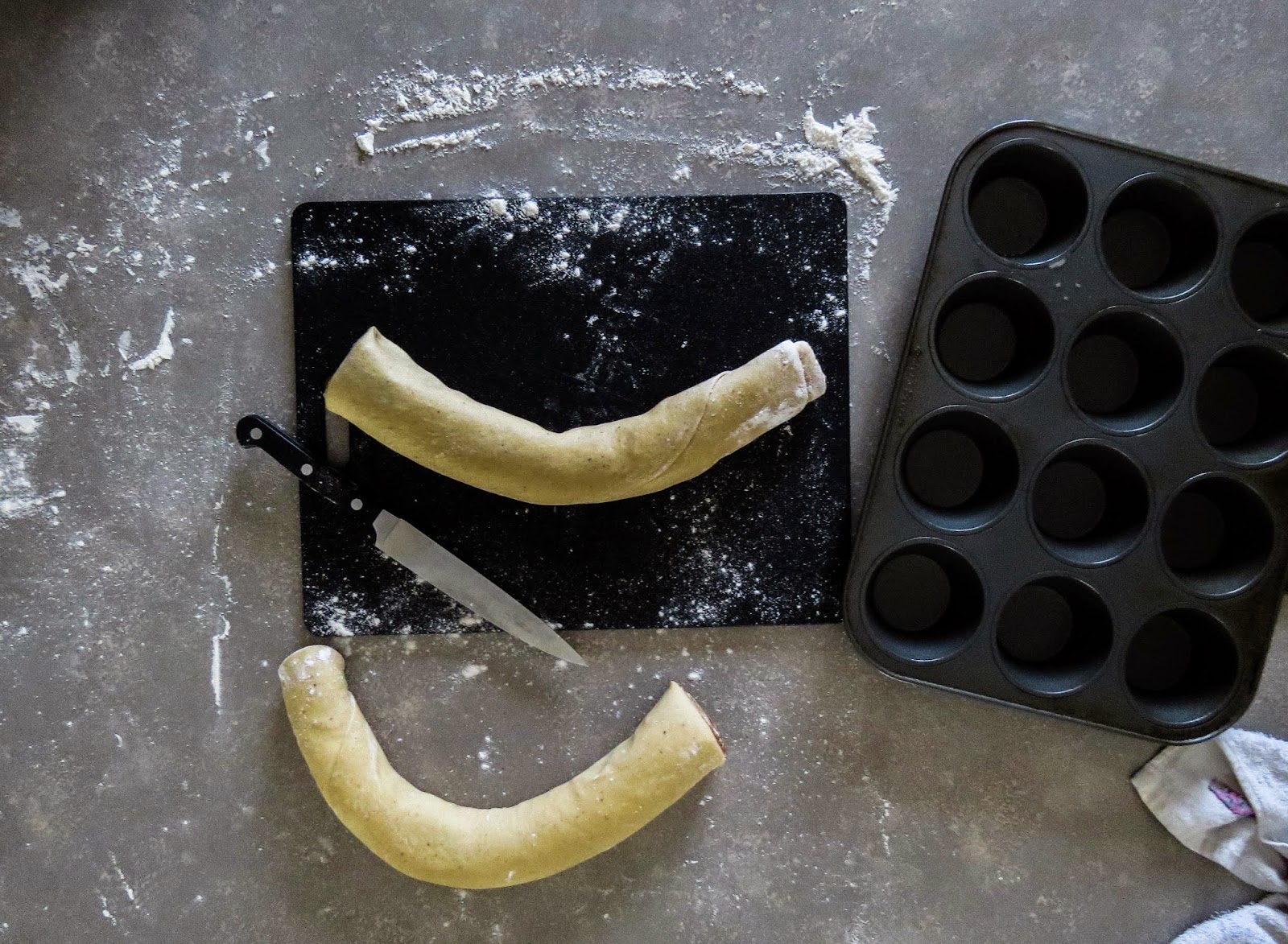 Place the buns back in the turned off oven for another 45 minutes to let rise once more. After the time is up, take them out and preheat the oven to 325°F.Bake these buns until golden brown, about 20-25 minutes. Let them cool for a good fifteen minutes before taking a butter knife and plopping them out onto the counter or wire rack to cool. 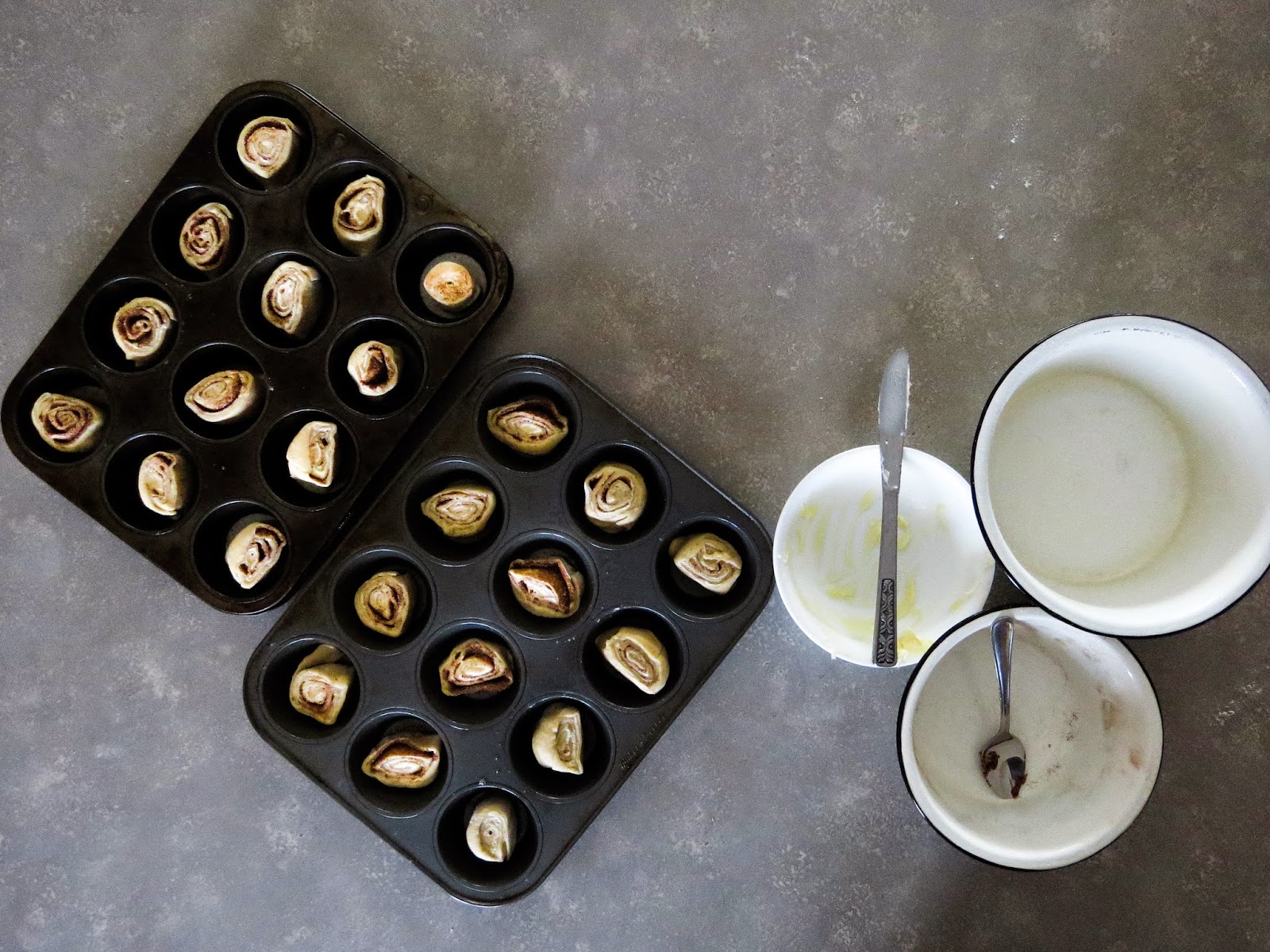 In a medium size bowl, whisk together your confectioners’ sugar, heavy cream and maple syrup the desired consistence you want is achieved. Take a spoon and drizzle the icing over rolls. Let set before transporting.

Pre-Step: Get ready to roll with the punches! Cinnamon rolls that is. What are you gonna do about the haters?

Step One: Pre-heat oven to 325°F. Over low heat in a medium saucepan, heat milk until it reads 100°F on a candy thermometer.  Remove from the heat and sprinkle in the yeast (it’s the yeast you could do) and sugar. I know you will be tempted, but don’t stir this mixture. Let it sit for about five minutes. After five minutes, whisk in your melted butter, egg yolk, vanilla and maple extract.

Step Two: In a large bowl, whisk together the flour, salt, and nutmeg. Making a well in the flour, slowly pour in your yeast mixture. With a hand mixer or stand mixer, mix together until a rough dough forms, about 3-5 minutes. Once your dough begins to come together, take it out of the bowl and form it into a ball. Place dough into a greased bowl, cover with a towel, and set on the stove top for 1 hour 15 minutes.

Step Three: On a floured surface, roll your dough out using a floured rolling pin, about ¼ inches thick. The dough should look like an edible rectangle. With a butter knife and a delicate hand, spread the soften butter on the dough. In a small bowl, stir together the sugar, cinnamon, cardamom, and ground cloves. Distribute the sugar mixture evenly over the dough.

Step Four: Starting from the length end, gently roll the dough into a cylinder. If you take it slow and believe in yourself, your cinnamon rolls will be rolled perfectly and look beautiful. Cut into one inch slices. Take two buttered muffin tins and place the cinnamon rolls into the tins. Cover with a towel and place on the stove top for 45 minutes.

Step Four: In a medium size bowl, whisk together your confectioners’ sugar, heavy cream and maple syrup the desired consistence you want is achieved. Take a spoon and drizzle the icing over rolls. Let set before transporting.
Posted by Nate Crawford at 6:00 AM 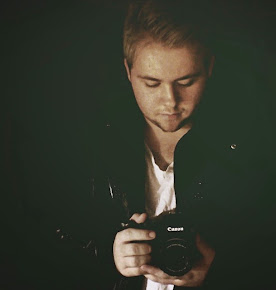