The Diner Stack Slider │ Cooking CU and My Dislike for Breakfast 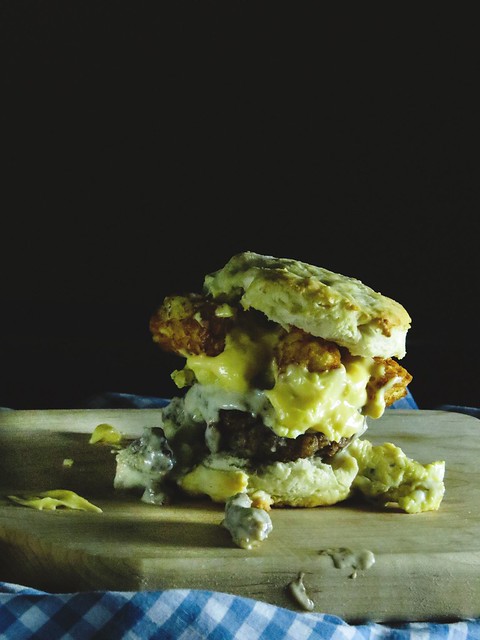 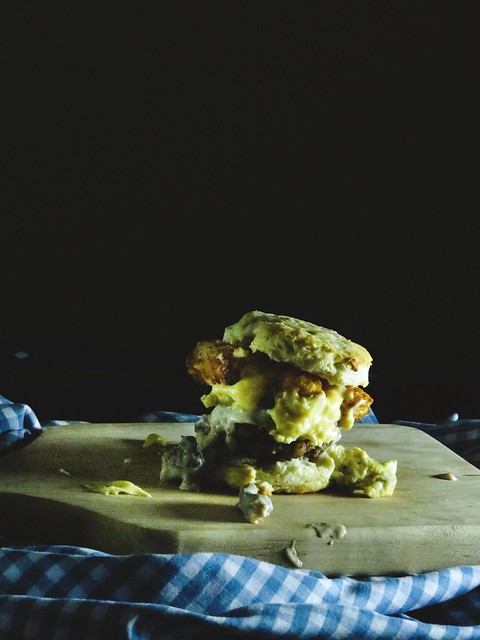 When I’m looking for inspiration, I tend to find places that inspire me in the most unlikely of ways. From long twilight walks in the woods, listening to pretentious hipster music, or getting coffee at a little bistro downtown, I am a scavenger when it comes to the never-ending search for that one crumb of inspiration. Last week was one of those “writer’s block” weeks. I ranted about that in my last post. One of my favorite authors, John Green, quotes his father by saying “coal miners don’t get coal miner’s block, so if it’s your work, do your work.” Maybe not the phrase I wanted to hear, but it was the phrase I needed to hear. I tightened my apron and persevered, trudging forwards through my creative stump, and now, producing a new, revamped recipe for you all. 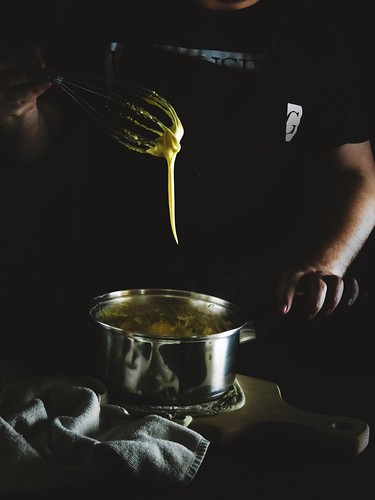 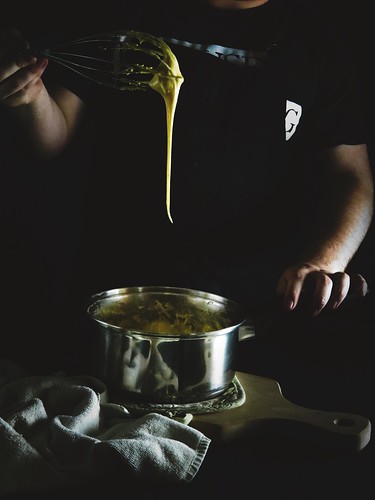 I was introduced to the Diner Stack by a fellow co-worker of mine around early fall last year. We were working a late shift that night and he had ordered it to-go from the little, family run diner from across the street. Merry Ann’s is  one of the only restaurants open for twenty-four hours in the CU area, so it’s the gathering spot for countless old-timers, tech-savvy business personal, university professors, families with whiny children, and late night drinkers needing a quick sobering up. They have three locations in town and I love going to the one downtown. It just has that moody, eclectic, lost-in-the-past diner vibe that somehow always inspires me. 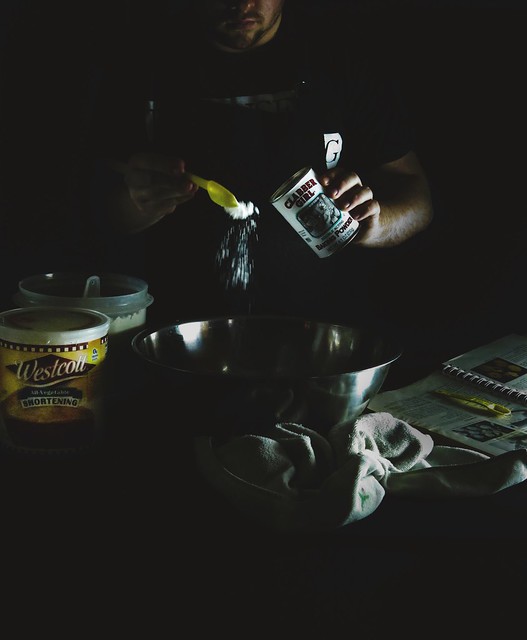 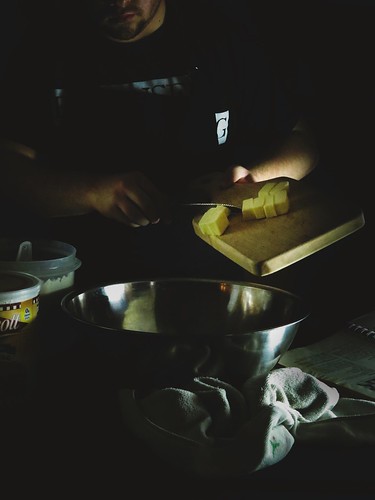 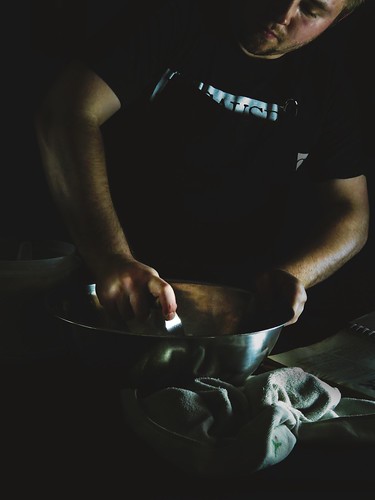 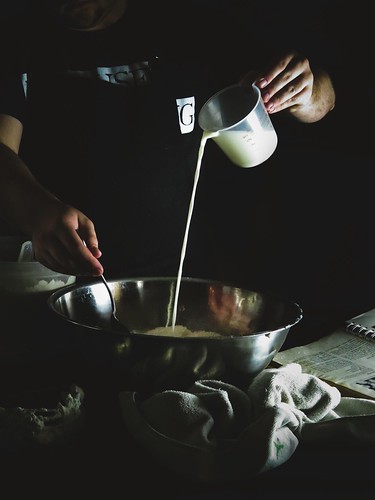 I’m not a big breakfast eater. I simply can’t stomach the sight of morning food while it’s still in the early morning hours. Pancakes at ten o’clock at night, perfect. Try serving me them at eight AM, I won’t even take a bite. The only breakfast you’ll ever see me eat in the mornings are handfuls of cereal (at the moment it’s Krave. It’s amazing. It’s a cereal that will change lives) and a cup of cold brewed coffee, before rushing out the door for class (most likely doing so late, but you didn’t hear that from me). 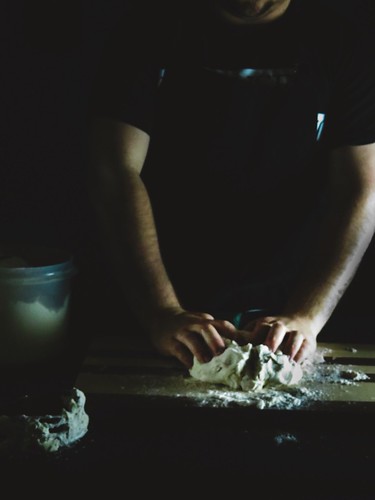 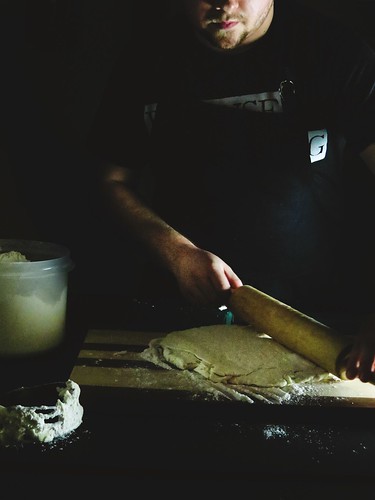 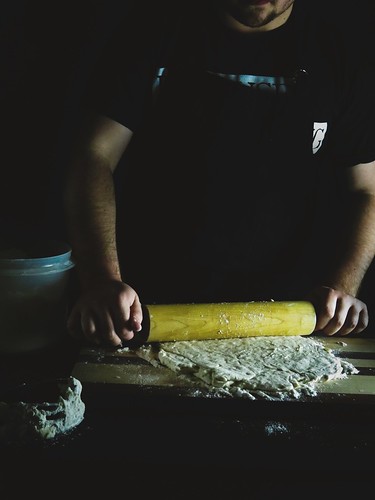 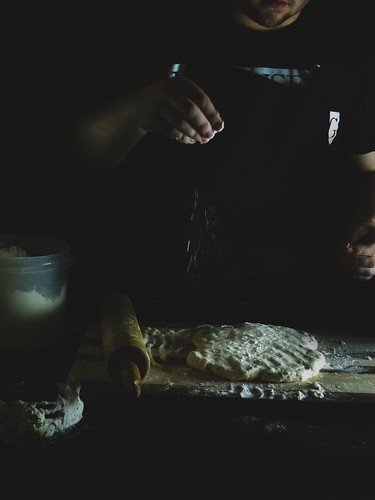 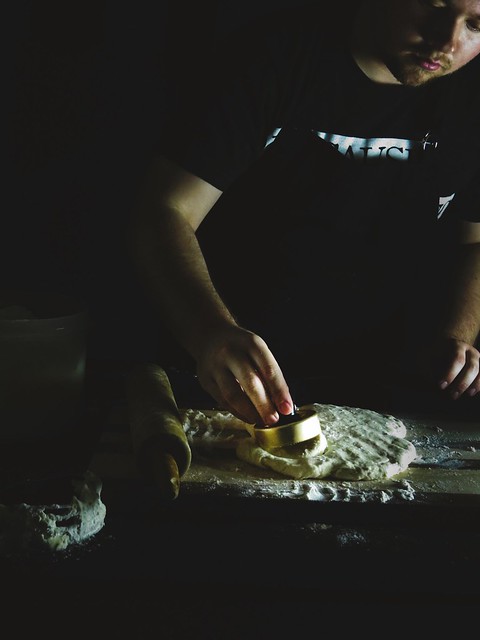 Having said all that, this dish is marvelous. It’s prodigious, bold, and the cure for most to all woes. From it’s beautifully charbroiled burger, layered with hot, crispy hash browns, smothered with an oozing cheese sauce, hearty sausage gravy, and all on top of a two thick slices of toast, it’s simplistic, saporous, and delicious. For my version, I decided to use sausage patties instead of hamburger, homemade biscuits instead of toast, and tater tots instead of hash browns.  I love homemade biscuits. There is just something life-changing about biting into a soft, warm, buttery biscuit that just melts in your mouth. The recipe actually comes from Momma Crawford’s old, 1970’s style Betty Crocker cookbook. These biscuits are perfect with a side of jam and butter. 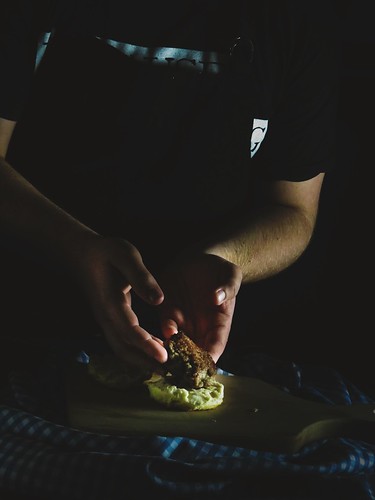 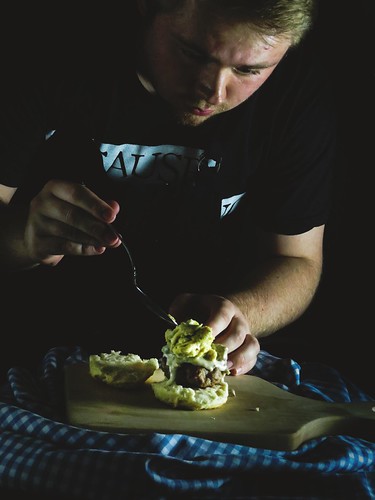 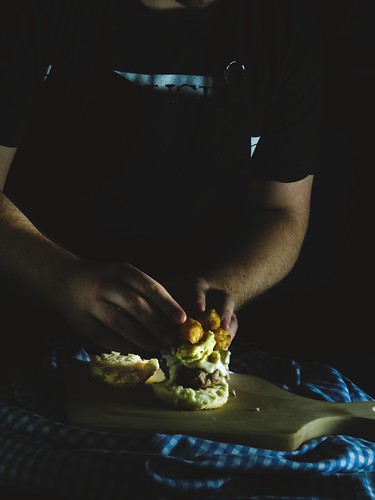 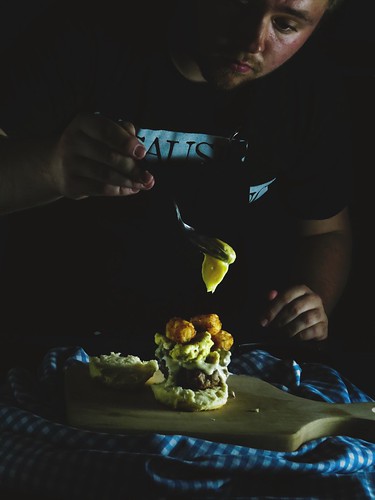 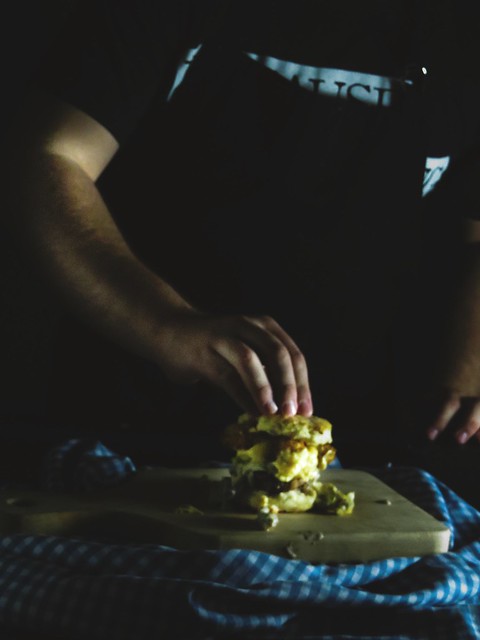 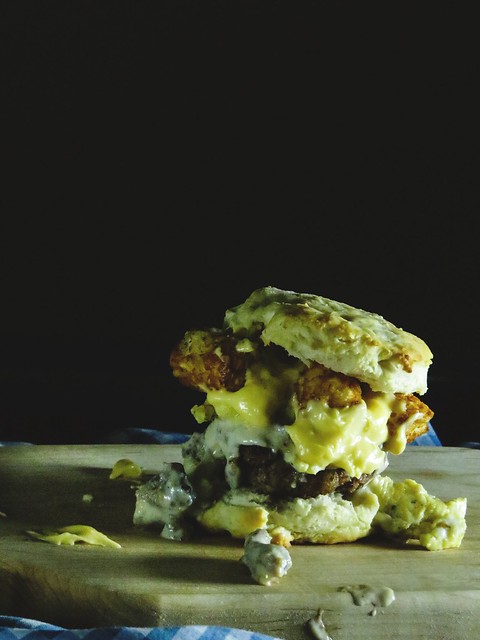 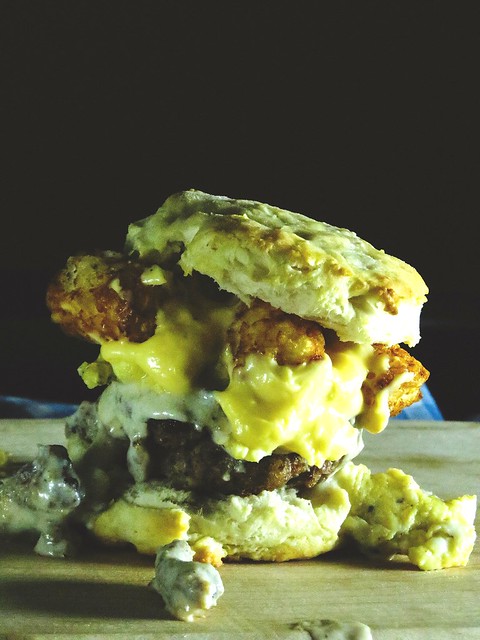 Pre-Step: Brewed some fresh cold brewed coffee and play some classic tunes to get the day started.

Step One: For the Biscuits: Pre-heat the oven to 450°F. In a large bowl, cut the shortening and butter into the flour, baking powder, and salt mixture. Gently pour in the milk and stir to combine. The dough will be incredibly sticky, so add in one tablespoon or two of flour to make it more pliable.

Step Two: Transfer the dough to a floured work surface and knead for five minutes. Roll the dough out to a little more than ½ inch thick. Take a donut cutter or a sharp knife, and cut out six to seven biscuits. Re-roll and cut for more. Transfer the dough to an ungreased cookie sheet. Bake for 11 minutes or until the tops are slightly golden brown.

Step Three: For the Sausage: Heat up a nonstick skillet or cast iron skillet. Take the sausage casing and form into individual patties, about ½ inch thick and two inches in diameter. Let cook on both sides until an internal temperature of 145°F is achieved, about 5-7 minutes, depending on the heat of the skillet.

Step Four: For the Eggs: In a medium bowl, whisk together the eggs in a clockwise motion. The secret to eggs is for air to be incorporated to create light, fluffy scrambled eggs. Whisk in the milk until well combined and creamy. In a skillet on medium heat, melt the butter and add the egg. Wait for the eggs to begin cooking underneath and, with a spatula, scrap the pan to release the eggs and “scramble” them. Cook until fully heated through.

Step Five: For the Sausage Gravy: In a large skillet on medium heat, add in the pork sausage and heat until browned and fully cooked. Add in the flour to absorb the oils in the pan. Slowly whisk in the milk and let cook until thickens, about twenty minutes. Stir occasionally so the milk doesn’t scorch the bottom of the pan.  Season with salt and pepper.

Step Six: For the Cheese Sauce: In a medium saucepan, melt the butter and add flour to create a Roux. Gently whisk in the milk. Heat and let thicken, about 2-3 minutes. Add slices of cheese and salt and melt until all combined and smooth.

Step Seven: Assembly: Slice one biscuit into two equal halves. On the bottom half, add one sausage patty. Layer that with the sausage gravy. Add a handful of tater tots. Smoother that all with the melted cheese sauce. Press it all together with the top half of the biscuit.

Posted by Nate Crawford at 6:00 AM 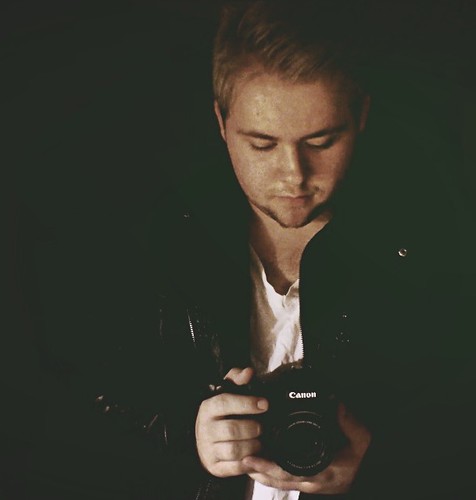