Roasted Creamy Tomato Soup + being in my first cooking class 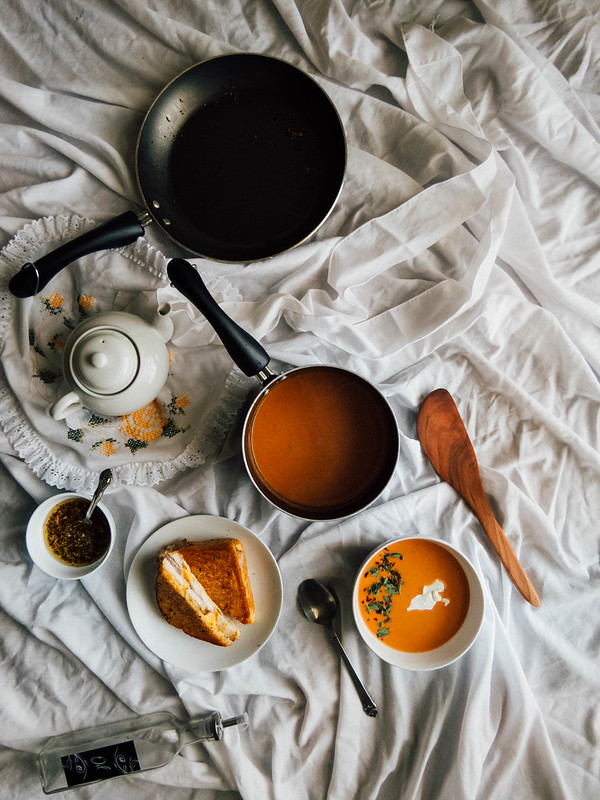 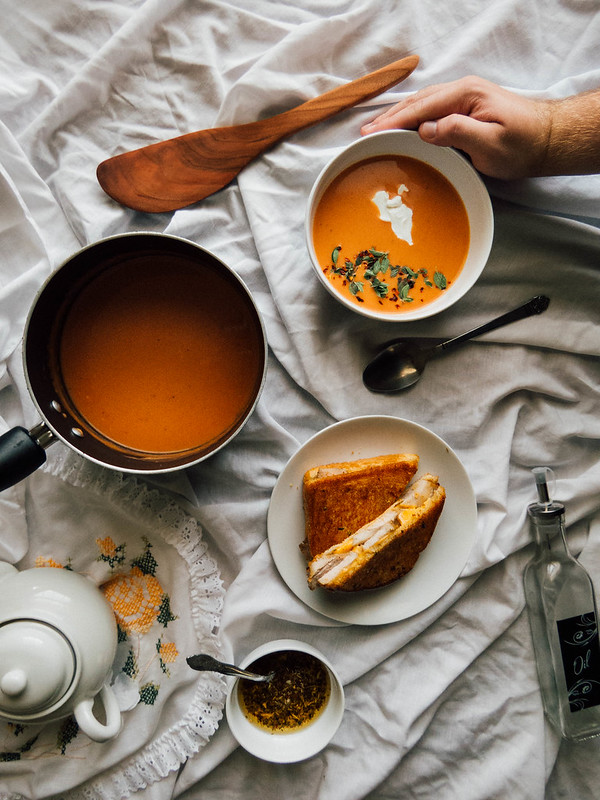 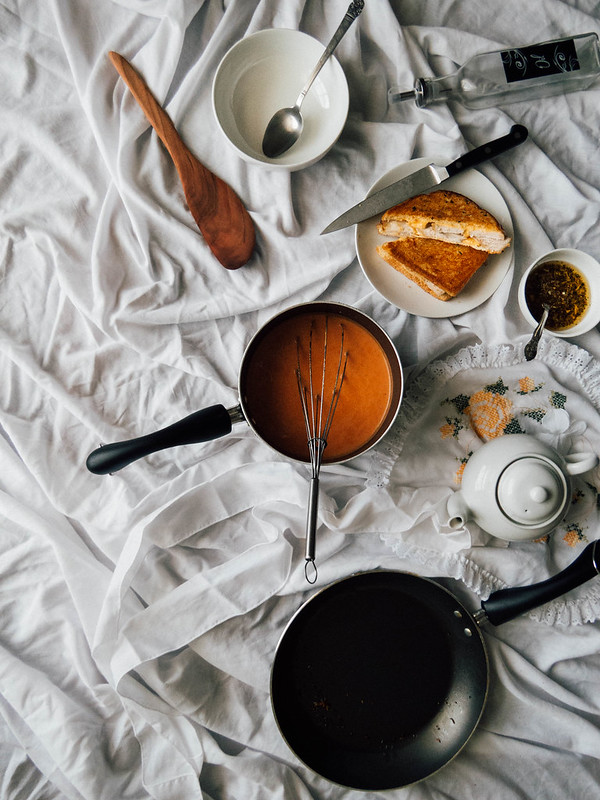 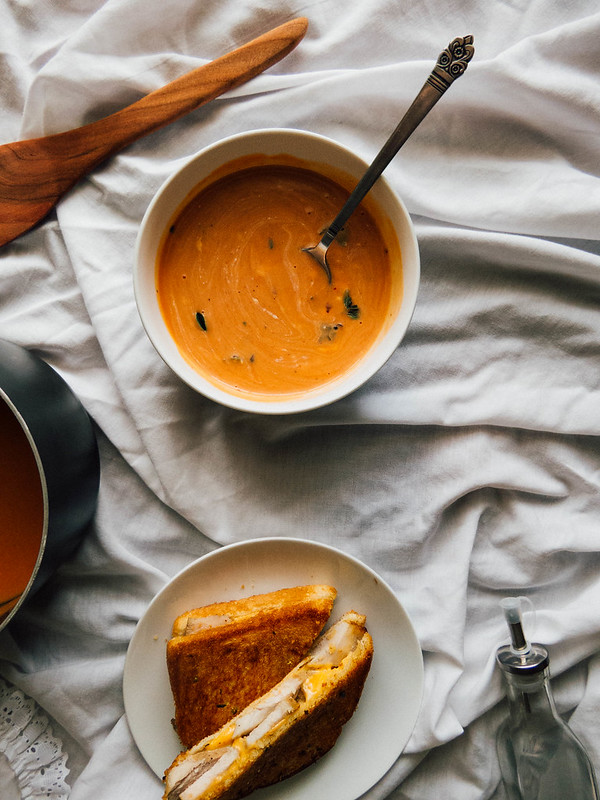 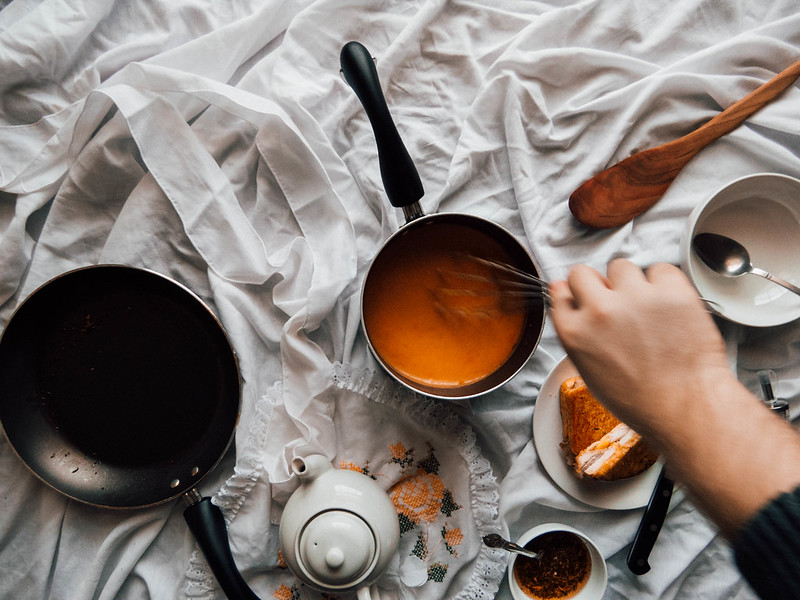 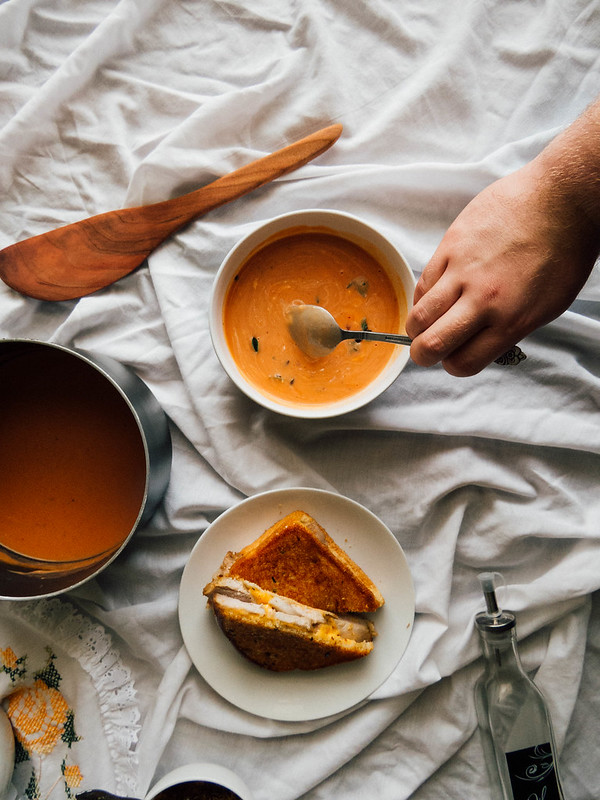 
It is almost Christmas! Do you have all of your gifts bought and wrapped? I know I don’t!  Though, if you don’t celebrate Christmas then….happy Boxing Day, I guess?

The fall semester is officially over! Woohoo! No more final exams, no more late night studying, and no more stressing out from academia (or at least for the next few weeks!). While I’m home on break, I am taking this opportunity to work in some blog posts while the time permits. I hope to have a handful of potential blog posts queued up and ready for the coming year. Will it happen? Probably not! But I can dream.


If you follow me on Instagram, then you would know that I was in a Food and Preparation class this past semester. As a twenty-something male who not only has a food blog but also obsesses about food continuously, I was surprisingly not too worried about this course. I have never been in a cooking class before, so I was unsure of how I would feel working in a controlled environment like the classroom. I feared that my personal relationship with food would be hindered by the confines of higher education. Luckily that was not entirely the case.

The class itself was divided into two parts, an online lecture portion, and the in-class lab portion. For the lab, the classroom was in a room with six separate kitchens in it. As I sat in my seat on the first day of class, I scanned the room to see who my potential lab partners would be. My class was roughly 25 students strong, and I was one of two guys in the class. As the instructor/grad assistant announced our lab partners, I found myself placed in a group with three girls, who I came to realize were relative newbies when it came to the kitchen and food preparation. I feared that our group from different worlds would never find commonality and camaraderie.

Through the course of the semester, the more we cooked and baked, the more our talkative group become friends. We laughed over failed attempts and cheered for our culinary successes. We talked about what we were going to eat after class and what we ate the day before. We talked about traditions and the food that reminded us of home. We learned techniques and mastered the art of spontaneity. Food became our common ground and we conversed from there. It was one of the most fun I have ever had in a class.

Through it all, I had distinct take away from the course. It was reaffirmed to me that people don’t have to be professional chefs or food bloggers with catchy titles or even a someone who simply hates to cook, to love food and the processes behind it. I learned that food, even in a classroom setting, can bring people together. Even between the walls of higher education, food prevailed as the bringer of different worlds and ideas together. That’s what I love too much about it. Food creates a space; it tears down walls that we build around ourselves. Food is the keeper of the community. 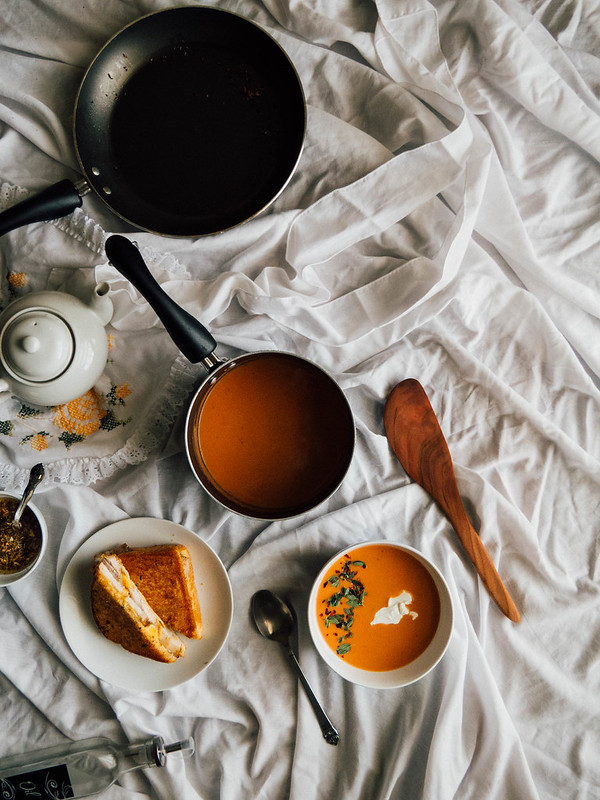 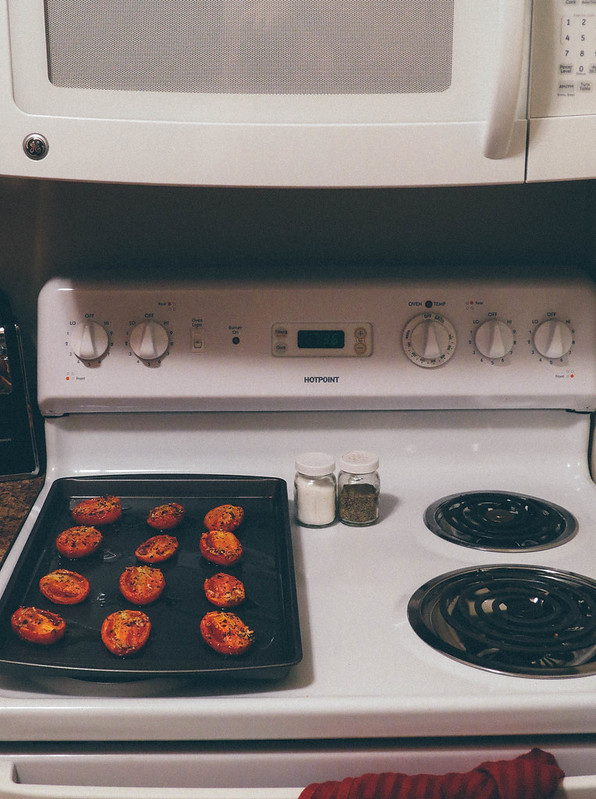 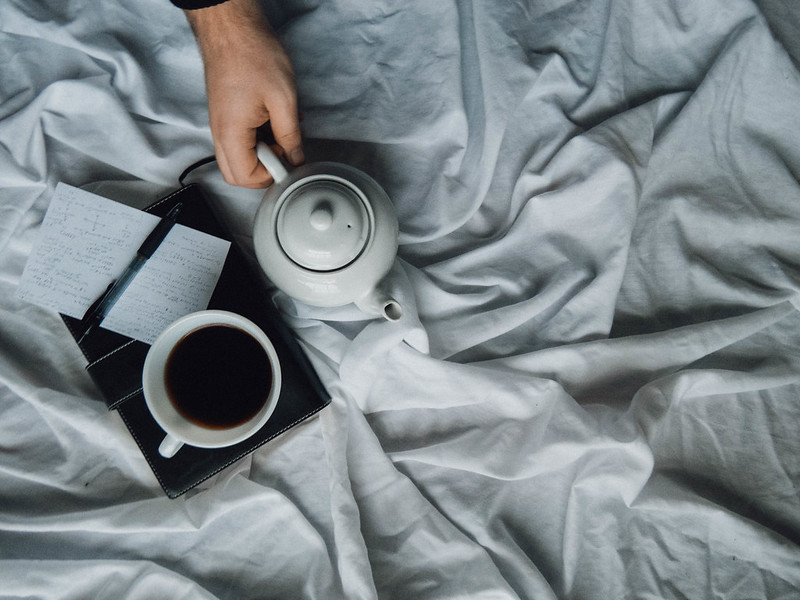 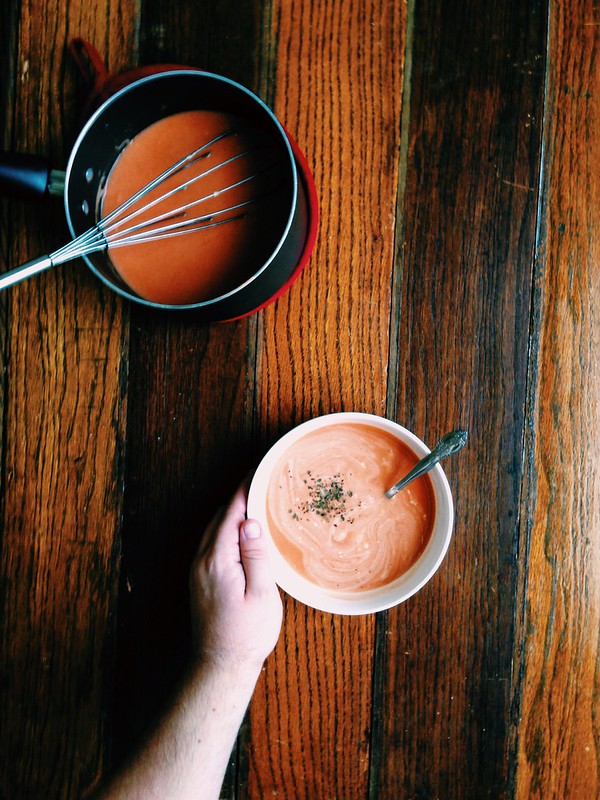 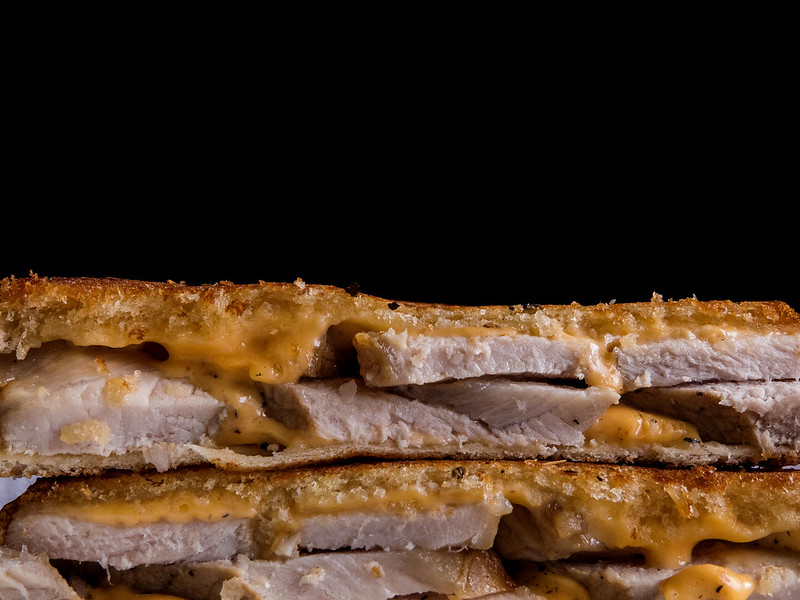 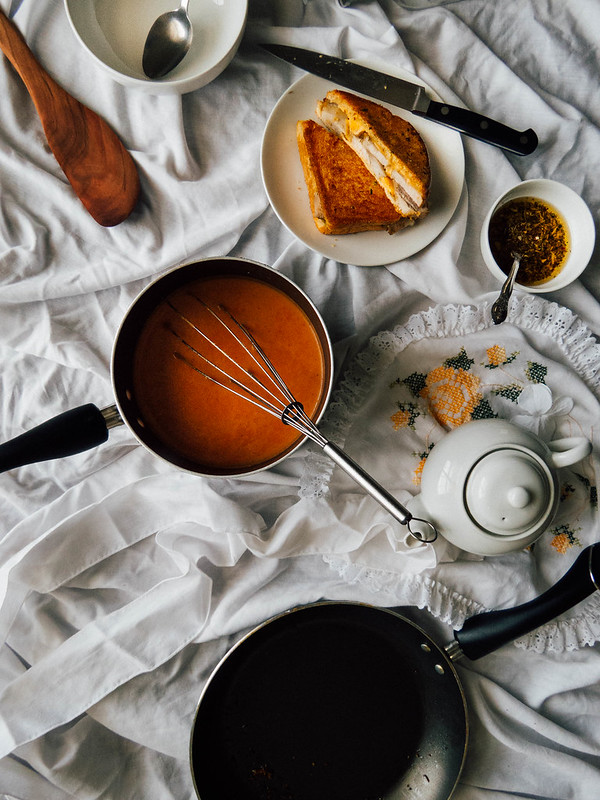 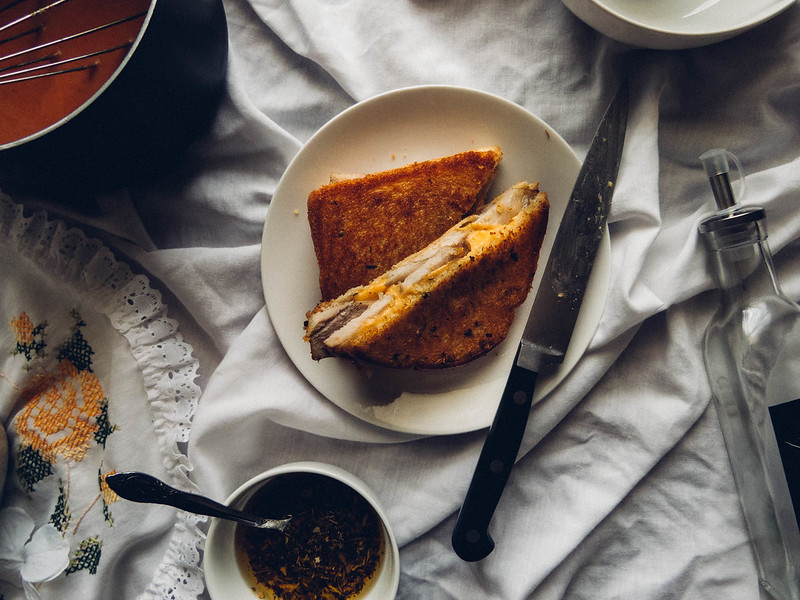 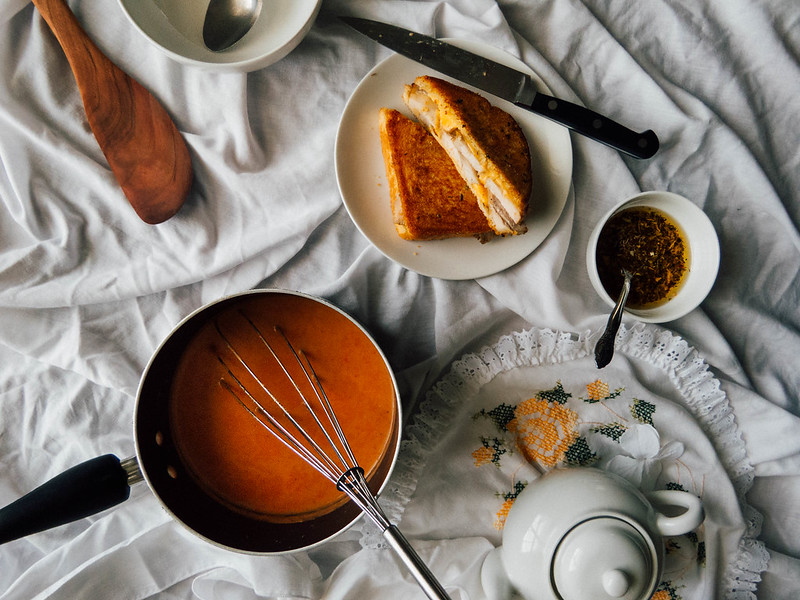 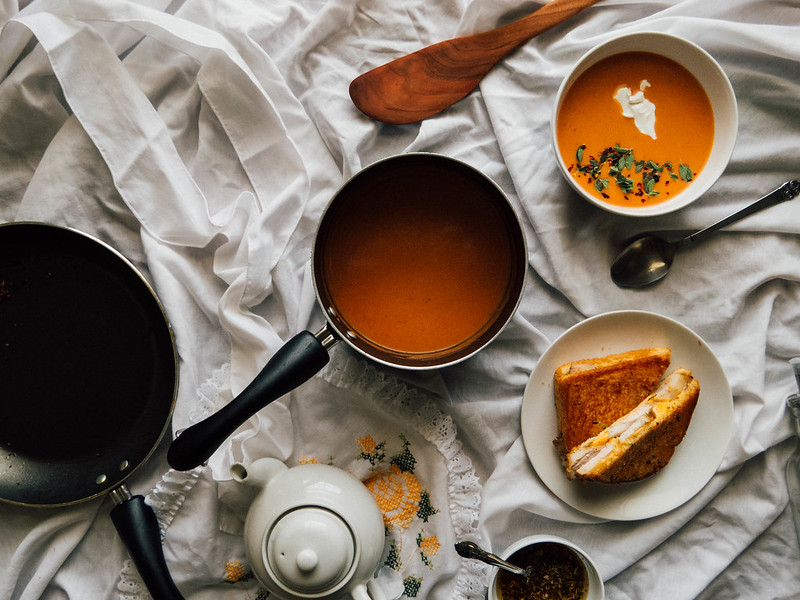 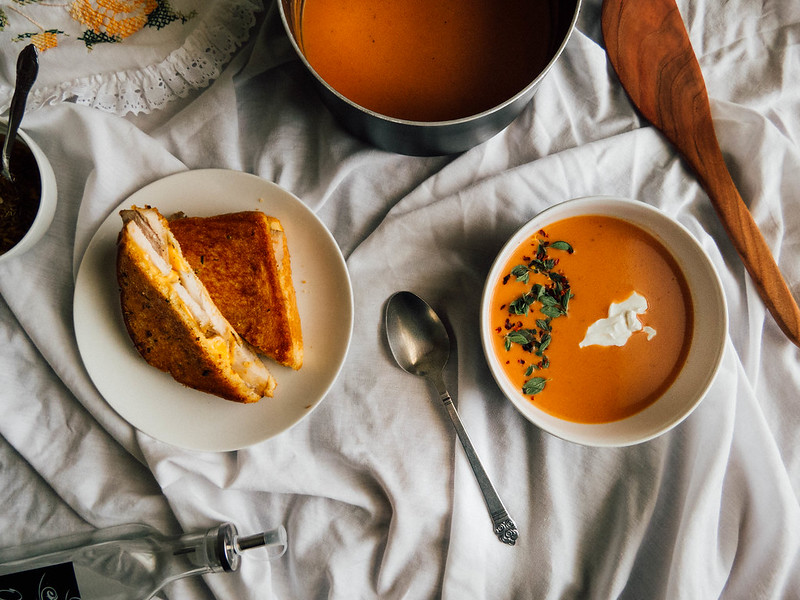 Roasted Creamy Tomato Soup
This recipe is inspired and adapted from the Creamy Tomato Soup recipe we learned in my Food and prep class. For my final exam, we were assigned recipes to recreate, and I drew tomato soup. So, I thought it would be only fitting to post my adaption of this delicious recipe.


Directions
1. Preheat oven to 275 degrees F. Place, halved tomatoes on a lined baking sheet. In a small bowl, mix the olive oil, onion, oregano, basil, crushed red pepper, and salt and pepper. With a pastry brush, brush olive oil mixture onto the tops on the tomatoes. Roast until slightly wilted and soft, about 1 hour to 1 hour and 30 minutes. Allow to cool.

*If making soup at a later time, Transfer roasted tomatoes to a mason jar or any airtight container. Store in the fridge until needed.

2. Place the roasted tomatoes in a food processor and pulse until a slightly chunky puree forms.
In a medium saucepan, sauté the onions in 4 tablespoons of butter until beginning to turn translucent. Add the tomato puree, tomato sauce, black pepper, and bay leaves. Cook until sauce thickens, about 8 to 11 minutes. Strain sauce through a fine mesh strainer.

3. In a medium saucepan, melt the remaining four tablespoons of butter. Add the flour and stir together to make a roux. Whisk in the milk and stir until sauce begins to thicken, about 5 to 10 minutes. Once sauce is thick, add roughly two tablespoons of tomato sauce (this will help prevent curdling). Add the remaining sauce and stir until completely combined. Serve immediately. 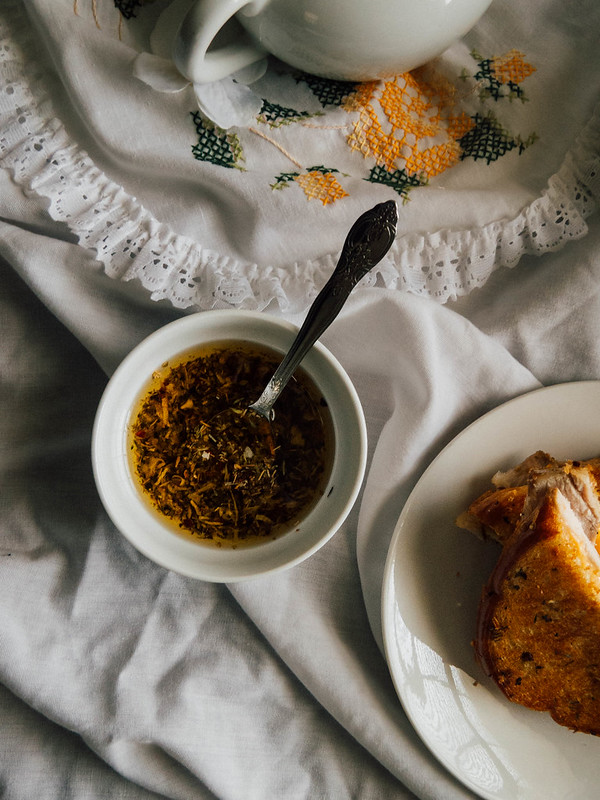 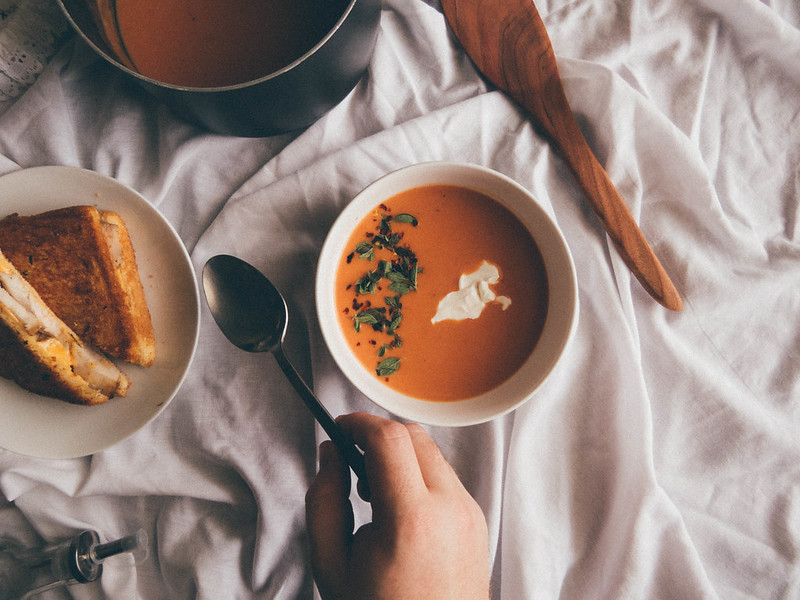 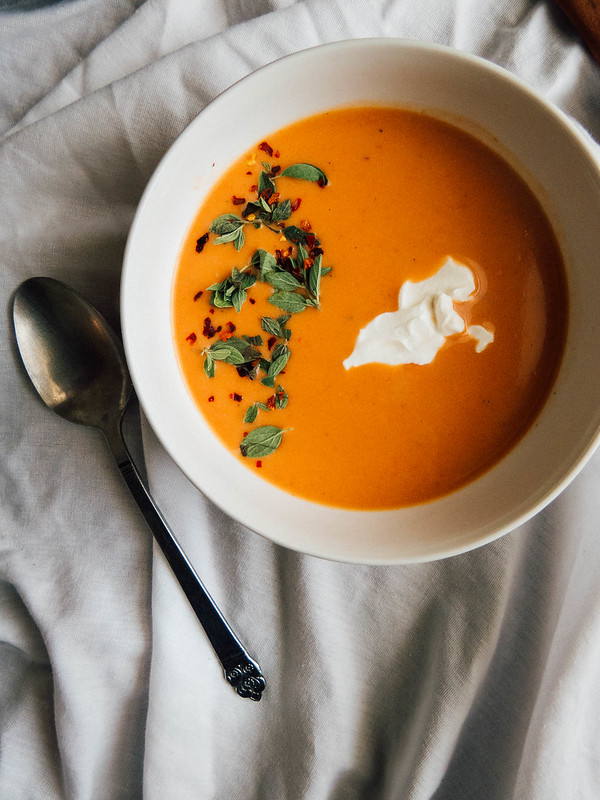 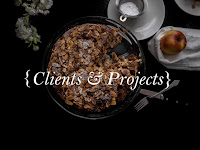 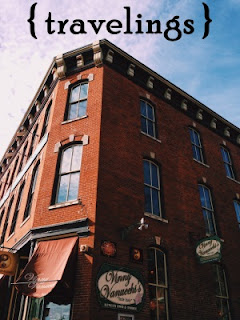 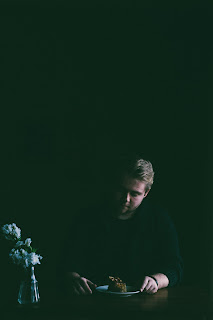 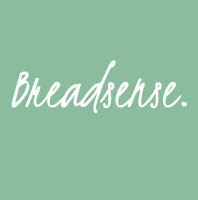